In a note sent out to clients, Morgan Stanley’s Katie Huberty has said that weaker App Store growth of just 4% year-over-year in May poses a risk to Apple’s June quarter services estimate, Philip Elmer-DeWitt is reporting. 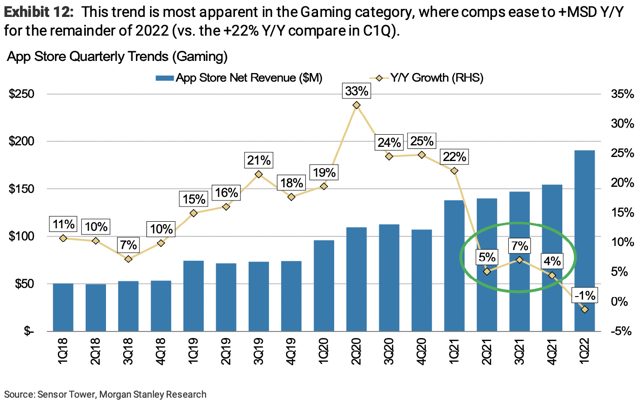 App Store’s net revenue growth experienced deceleration last month despite a 4-point easier comp, with a broad-based deceleration across most regions and categories, the analyst noted.

Huberty continued that even though Morgan Stanley is bullish on the longer-term App Store and Services outlook, a deceleration in App Store growth and monetization “could be a near-term headwind to results.” Beyond the June quarter, however, the analyst said “we see a path for App Store growth to reaccelerate.”

We see a path for App Store growth to reaccelerate, as Y/Y compares for the remainder of CY22 (and into CY23) ease each successive quarter, from an average of 32% Y/Y in the last 4 quarters to an average of 14% over the next 3 quarters, with 2 year stacked growth compares decelerating after 2Q as well.

For now, Morgan Stanley has maintained its overweight rating and $195 target for AAPL.