Apple Maps ‘Look Around’ Feature Continues to Lag Behind Google

A comprehensive article by Justin O’Beirne has highlighted how Apple Maps ‘Look Around’ feature, which debuted in June last year to compete with Google Street View, offers extremely limited coverage in the U.S. as compared to coverage in Canada. 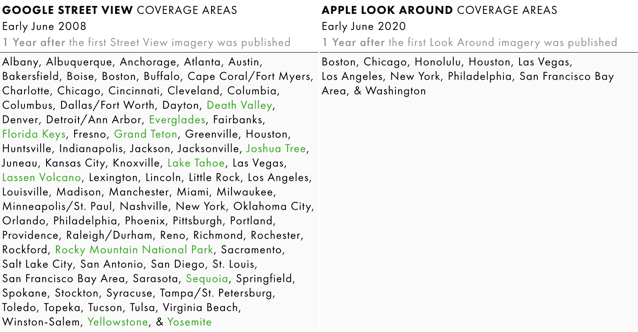 O’Beirne points out that roughly one year after Google published its first Street View imagery, it had coverage in seventy-four metros and eleven major parks in the U.S., whereas Apple had coverage in just ten metros in the same period.

Moreover, the majority of the metros that Apple had released were only partially covered. For example, Apple’s Look Around coverage for the New York City area, covered less than half of New York City’s metropolitan population.

So given the pace and extent of Apple’s Look Around releases, it was surprising to see Apple release Look Around for every metropolitan area in Canada—thirty-five in total—shortly after passing the one and a half year mark on December 10, 2020.

Surprisingly, Apple has not only covered every Canadian metropolitan area in full but has also covered the rural areas between them.

As to why Apple’s Look Around covers so much of Canada and so little of the U.S. remains a mystery at this point. What do you guys think?