A Chinese social network Weibo user has apparently leaked the names of Apple’s upcoming new Powerbeats Pro colours, which are expected to be released very soon, iMore is reporting.

According to the leaker, Apple will release the Powerbeats Pro in Cloud Pink, Glacier Blue, Spring Yellow, and Lava Red colour options. Apple will continue to offer the new colours at the same price of CAD $329.95 in Canada. 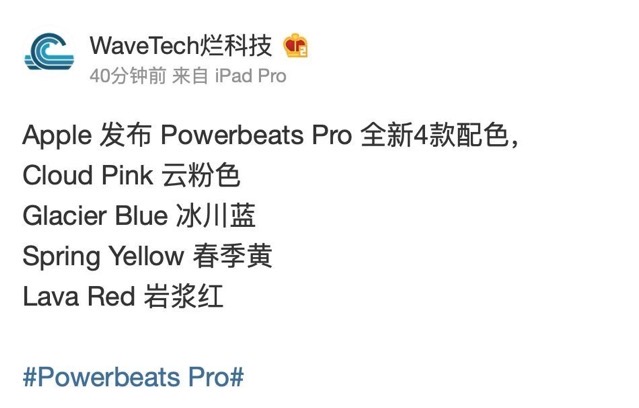 Currently, Apple is offering its totally wireless Powerbeats Pro earphones in Black, Navy, Moss, and Ivory colours. The lightweight earphones are built for performance with a reinforced design for sweat and water resistance.

They feature adjustable, secure-fit ear hooks with multiple ear-tip options and are made to stay in place, no matter how hard you workout. Each earbud also has full volume and track controls so you don’t need your iPhone or other device to adjust your music.

There is no word yet on any new features being added to the upcoming new Powerbeats Pro colours.