As discovered by the folks over at MySmartPrice, Apple has just been granted EEC registrations for a bunch of new tablets suggesting a major refresh could be coming soon to the iPad lineup (via VentureBeat). The approvals cover a collection of 6 models i.e. A2123, A2124, A2152, A2153, A2133, and A2154. 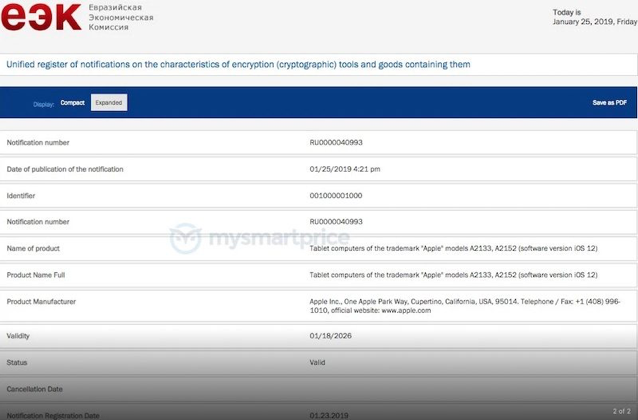 According to the regulatory database, each model has been listed as an Apple tablet running iOS 12 with a January 23 registration date.

“While the model numbers alone don’t necessarily mean anything — last year’s Wi-Fi and Cellular models bore widely separated A1893 and A1954 numbers — the list appears to correspond with three clusters of Wi-Fi and Cellular models, two sequential, plus A2133 and A2154 grouped together in one filing. If all of the models are released simultaneously, that would represent a fairly significant expansion of the iPad line, which plateaued in sales some time ago.”

It must be highlighted that last year, two iOS 11 iPads were disclosed by the ECC on February 19, which were unveiled the following month at an education-focused Apple event. Since Apple annually refreshes its entry-level iPad with new A-series processors around March, it is highly likely that we see another such refresh for 2019 as well.

Furthermore, since Apple doesn’t usually replace iPads until a year or more after their initial release, the current iPad Pro models which were released in October last year, are unlikely to be updated until the end of the year.

Streaming service FuboTV announced on Wednesday it has launched three Disney channels within its Premium package. Available now are the Disney Channel, Disney Junior and Disney XD. According to FuboTV, these new Disney channels are part of the company’s partnership with STACKTV, which began last year and added Global, HGTV Canada, Food Network Canada, W Network, […]
Gary Ng
3 mins ago