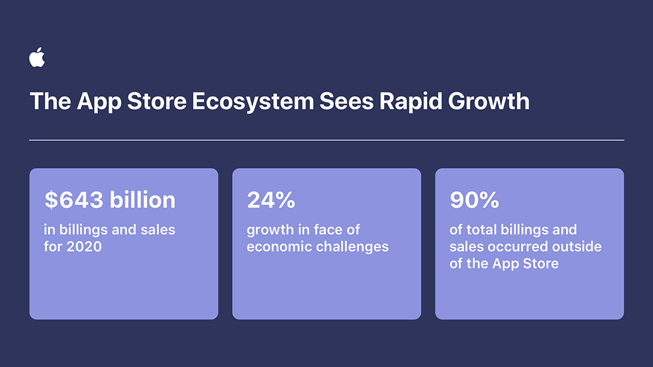 Apple on Wednesday announced the App Store continues to be a major economic juggernaut, as per findings from an independent study.

According to Apple, the App Store ecosystem “facilitated $643 billion in billings and sales during 2020, a 24 percent year-over-year increase.”

Economists from the Analysis Group concluded in a report the App Store “played a vital supporting role as developers adapted to the year’s challenges and brought new innovations to life.”

The study titled, “A Global Perspective on the Apple App Store Ecosystem,” says small developers have increased globally by 40% since 2015 and make up over 90% of App Store developers. Small developers are those with less than 1 million downloads and earnings annually.

“Developers on the App Store prove every day that there is no more innovative, resilient or dynamic marketplace on earth than the app economy,” says Tim Cook, Apple’s CEO, in a statement.

“The apps we’ve relied on through the pandemic have been life-changing in so many ways — from groceries delivered to our homes, to teaching tools for parents and educators, to an imaginative and ever-expanding universe of games and entertainment. The result isn’t just incredible apps for users: it’s jobs, it’s opportunity, and it’s untold innovation that will power global economies for many years to come,” added Cook.

Apple says the App Store is now home to 1.8 million apps and sees over 500 million visitors each week, across 175 countries.

The company’s annual Worldwide Developer Conference (WWDC) is set to kick off next week on June 7, 2021, where we will see a preview of next versions of the Apple’s mobile and desktop software.