Back in March, Judge Lucy Koh struck down roughly $450 million from the $1.05 billion damages awarded to Apple by a jury last year in a patent infringement suit against Samsung, while also ordering a new trial for some Samsung products. Now, if Apple wins that trial, which is scheduled to begin on Tuesday, Cupertino could snatch the second largest patent infringement award in history. 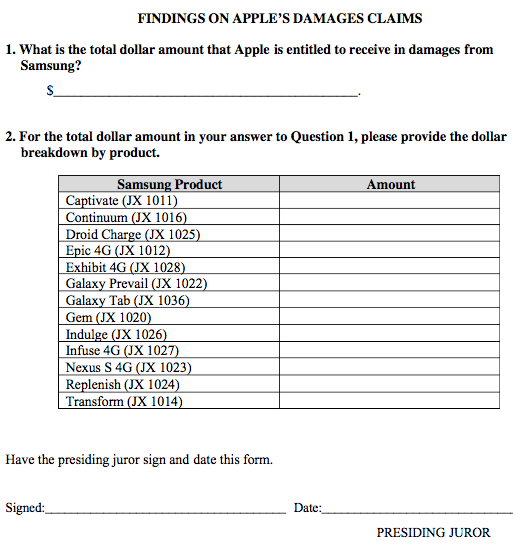 Fortune’s Philip Elmer-Dewitt notes that according to may experts, the new jury will come up with an award smaller than the original $450 million, though it could go the other way. “Pending appeal, Samsung is still on the hook for the rest of the $1.05 billion award — nearly $600 million — that’s not part of this trial”, he says. In the new trial, Samsung’s lawyers have apparently made the same mistake they made in the first trial by filling out a 20-page form pushing for a jury, while Apple’s legal team, who seems to have learned its lesson well, proposed the attached one-page form, which Judge Koh has agreed to use.

In the new trial, according to FOSS Patents’ Florian Mueller, Samsung’s lawyers were pushing for a jury form nearly as complicated: “Samsung wanted a matrix specifying different types of damages (reasonable royalty, Apple’s lost profits, Samsung’s profits) for each product. It also wanted the court to accordingly instruct the jury to determine not only an amount but also the “type” of damages.”

It was one of a series of pre-trial motions that have gone Apple’s way.”Samsung,” Mueller wrote Tuesday, “has been unsuccessful so far with its attempts to muddy the water for the new jury.”

A third trial of Samsung’s products, including the Galaxy S3, is scheduled to begin in March next year.