Music Industry Finally Profits Off Streaming Thanks to Apple, Spotify

According to a draft report from the Recording Industry Association of America obtained by Bloomberg News, the music industry is finally making profits off streaming music, thanks to the growth of paid services like Apple Music and Spotify. The report highlights that retail spending on recorded music grew 8.1% to $3.4 billion in the first half of 2016, and that the U.S. industry is on track to mark the first back-to-back annual growth since 1998-1999. 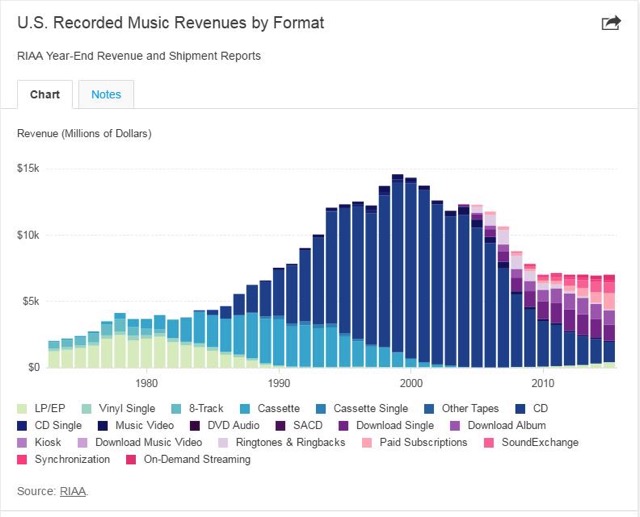 The data from RIAA’s report shows that credit goes to streaming services, revenue for which in the U.S. grew 57% to $1.6 billion in the first half of 2016, accounting for almost 50% of industry sales. Subscriptions totaled $1.01 billion, while shrinking purchases of albums and singles were observed. “We’re starting to see on-demand music streaming as no longer a thing that hipster college kids and young people do,’’ said Larry Miller, a former industry executive who now teaches music business at New York University.

Spotify operates a larger paid subscription service and has showed no signs of slowing down since Apple Music began competing in that market. Most of the users for Apple Music are people new to paying music, not former Spotify customers, according to label executives.

Meanwhile, purchases of music, whether downloaded or on a CD, continue their steep descent. Physical music sales tumbled 14 percent while downloads also shrank by a double digit percentage.

Meanwhile, the world’s largest Internet retailer Amazon is investing in a paid music service to help sell other goods, while Pandora is also planning to introduce a paid, on-demand service by year’s end.