Despite British Columbia being classified as a ‘rapid growth’ province for COVID-19 cases, the BC government does not intend to use text alerts or adopt the COVID Alert app for exposure notifications, according to a report by CTV News. 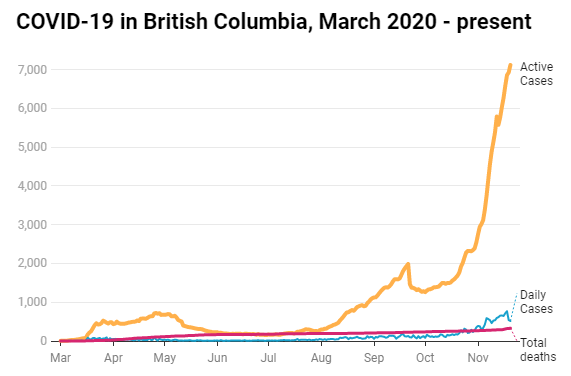 During a modeling briefing in Ottawa, Dr. Theresa Tam, Canada’s Chief Public Health Officer, revealed that per-capita infection rates in BC are on-par with those in Canada’s hardest-hit provinces, and that COVID cases across the nation stand to quadruple to 20,000 per day by the end of December if preventative measures aren’t taken.

When CTV News asked British Columbia’s Ministry of Health if the government had any plans to use the province’s emergency alert system to spread awareness in areas with high risk of infection, they received a response in the negative.

“At this point in time our government does not believe a broadcast intrusive alert is necessary,” reads an email sent to CTV News by Emergency Management BC.

“While the Alert Ready system is useful in a situation where public safety relies on immediate notification, the alert system only informs on a moment in time. The province has been providing regular briefings as the situation is continually evolving. The communication of orders has also gone out through a variety of channels, including media, highway signs, social media, online content, stakeholders, and community leaders.”

The email from Emergency Management BC conflicts with what British Columbia Premier John Horgan said about the majority of people not paying attention to government briefings or messages in news media, and that alternative, urgent lines of communication need to be established.

“We need to find … strategies to embrace and engage with those people who are not hearing this message. We’re always looking at strategies,” said the premier.

While Alberta has employed its own problematic contact tracing app — ABTraceTogether — in lieu of the COVID Alert app, British Columbia remains insistent on hiring people for contact tracing instead.

As of November 19, COVID Alert has been downloaded 5.3 million times, with 5,412 people voluntarily entering in one-time keys, according to the federal government.

While releasing the first trailer for the Antoine Fuqua-directed historical drama, Apple has today announced that Will Smith’s next film ‘Emancipation' will premiere in theaters on Dec. 2 and will stream on Apple TV+ starting Dec. 9. According to Variety, Apple’s decision to delay the film to 2023 after Smith became embroiled in controversy for slapping...
Usman Qureshi
29 mins ago