B.C. Distracted Driver Slapped with $1,800 in Fines in Under 6 Minutes

A Vancouver driver is facing more than $1,800 in fines after being pulled over twice within a span of six minutes for distracted driving. According to Global News, it happened just before 10 a.m. on Monday while the Vancouver police were conducting enhanced enforcement as a part of the distracted driving month. 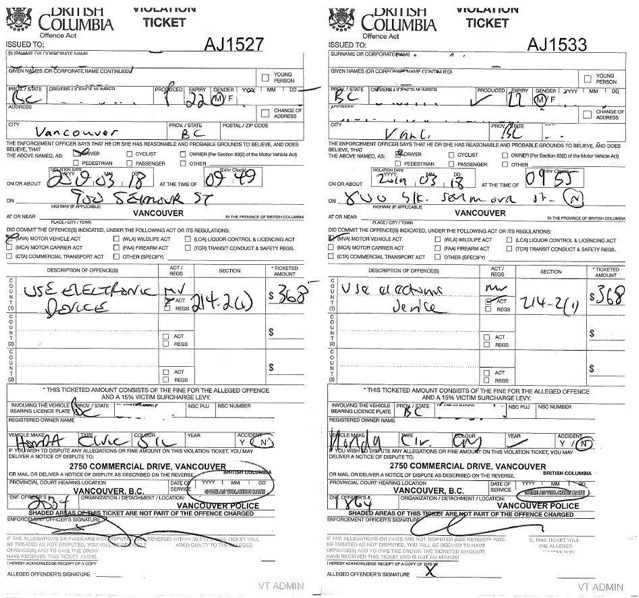 “The individual was pulled over and issued a violation ticket for using an electronic device while driving… within six minutes, that same driver was pulled over by a separate officer about a block away and was issued the same ticket”, said Sgt. Jason Robillard.

Looking at the photos of the tickets, it appears the motorist was driving a Honda Civic and was handed his first ticket at 9:49 a.m. at 900 Seymour St., while the second ticket was issued at 9:55 a.m. at about 800 Seymour St.

In both instances, the driver was handed a $368 ticket for use of an electronic device, although, the final amount payable by the driver is just over $1,800:

Under B.C.’s enhanced distracted driving penalty program, they’re also on the hook for a $444 Driver Risk Premium — awarded for two electronic device infractions within three years. Each of those infractions is also worth four Driver Penalty Points; eight points assigned within a 12-month period are worth another Penalty Point Premium of $624.

In total, that leaves the driver owing $1,804, assuming they did not have any previous recent penalty points or distracted driving infractions on their record.

Sgt. Robillard strongly urged all drivers to leave the phone alone while driving by saying, “It’s just not worth it.”