The folks over at AppleInsider have put the entry-level iMac Pro (which starts at $6,299 CAD) to the test, by performing a series of performance benchmarks to find out just how much bang for your buck you’ll get out of your big investment. 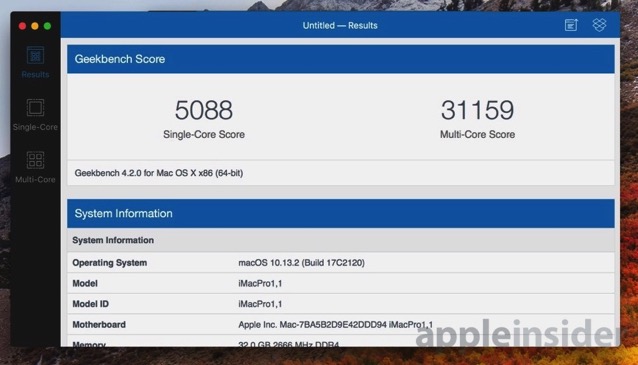 They tested the iMac Pro with the latest version of Final Cut Pro X, starting off with a pre-rendered 34-minute video project with multiple 4K layers, color correction and effects. The whole rendering process took 18 minutes and 5 seconds, about twice as fast as it did on a specced-out 2016 MacBook Pro. CPU utilization was about 30 percent, with clock speed varying from 3.5 to 3.91 gigahertz.

Taking a look at Geekbench 4, a benchmark that looks at all-around performance, our 8-core Xeon scored a respectable 31,159 multi-core score, and even more impressive 5,088 single-core speeds. Typically, Xeon processors are great for multi-core tasks, but they lag behind in single core. These tests show the higher boost clocks from the latest generation of Intel Xeon processors really help.