During the iPhone 5S launch event, Apple claimed 2X performance increase over the iPhone 5 in CPU and GPU performance, and 40X over the original iPhone, with its latest flagship smartphone. According to GSMArena’s benchmarks, it appears that Apple’s next generation system-on-a-chip A7 64-bit processor is indeed twice as fast as the iPhone 5’s A6 chip.

“A GFXBecnh 2.5 score confirms the performance has indeed gone up, but the test is getting old now (and uses OpenGL ES 2.0) so we’re not seeing the full capabilities of the new GPU (like those fancy lens flares in Infinity Blade III).”

Apple mentioned the inclusion of OpenGL ES 3.0 support at the iPhone 5S keynote presentation, but GPU model was not disclosed. The source points out that since Apple A6 in the iPhone 5 had a PowerVR SGX543MP3, there’s a high chance Apple is using a newer PowerVR or at least one with more cores / at a higher clock rate.

“In the 1080p off-screen test, the iPhone 5S shows nearly double the performance of its predecessor. This doesn’t show up in the on-screen test though as the benchmark hits the 60fps screen limit (the test is old and can’t stress the GPU at the native 640 x 1136 resolution of the iPhone 5s).” 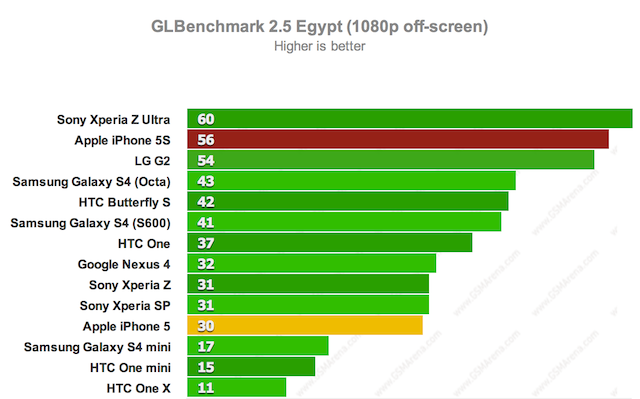 With OpenGL ES 3.0 support on iOS 7 and improving mobile GPUs, we’re sure to see some amazing smartphone 3D games in the near future.