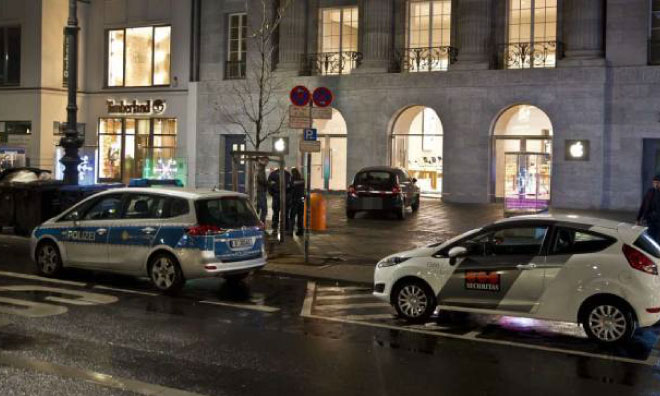 Apple’s retail store in Berlin, which is located on the city’s longest shopping avenue, Kurfuerstendamm, was robbed this morning when a gang of thieves crashed a stolen car through the store’s front window, Bloomberg is reporting. The thieves made off with MacBooks, iPhones and iPads in two other vehicles, making it the seventh break-in of its kind in the city this year according to the local police.

“These are not amateurs,” Berlin police department spokesman Thomas Neuendorf said by telephone. “We suspect that we’re dealing with a gang.”

A stolen Opel Corsa was used to smash the Apple store window and the thieves escaped in two Audis, Neuendorf said.

The police said that on Dec. 9, the same gang drove into Berlin’s Alexa shopping mall and took about 100,000 euros ($137,000) of electronics. Shops in Berlin have been taking extra precautions to secure their merchandise since the break-ins began, the police added. Apple managers had therefore locked away their inventory overnight, as a result of which the thieves were only able to take 20 display devices.

The Kurfürstendamm store is Apple’s only retail outlet in Berlin and opened in May of this year. The store, located in a renovated 100-year-old theater in one of Berlin’s most prestigious shopping districts, was Apple’s 12th shop in Germany and took almost two years to construct.