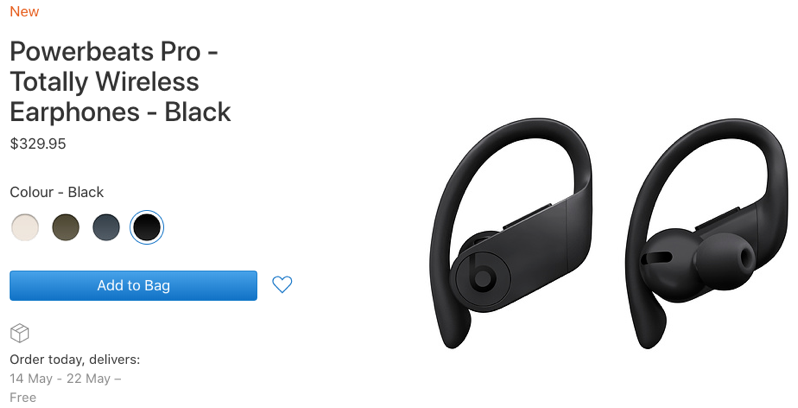 As previously announced, Apple has launched pre-orders for its new Powerbeats Pro wireless earphones, powered by the new H1 chip found in the second-generation AirPods and always-on “Hey Siri”.

Powerbeats Pro wireless headphones are priced at $329.95 in Canada and online orders are showing delivery as soon as May 14. The headphones are set to debut at Apple retail stores on May 10.

These headphones are geared towards “elite athletes” and have secure-fit hooks to go over your ears so they don’t fall out. Apple says they come with 9 hours of listening time and the Powerbeats Pro will easily pair like AirPods to your iOS device.

Both earbuds have volume controls and the charging case adds 24 total hours of combined playback. Fast Fuel charging means 5 minutes of charging provides 1.5 hours of playback, while auto on/off sensors will put the earbuds into sleep mode when not in use.

As of writing, only Powerbeats Pro in black are available to order, as ivory, navy and moss colours are unavailable.

Click here to pre-order Powerbeats Pro from Apple.ca for $329.95.