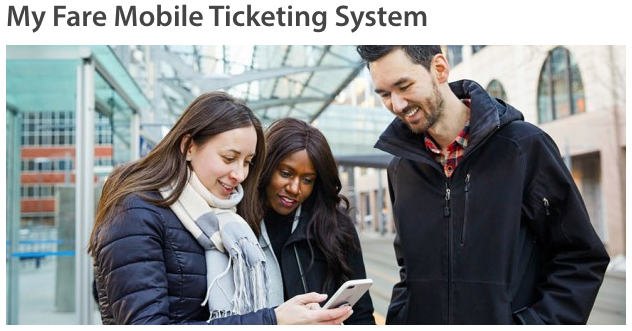 Calgary Transit is set to launch a new mobile ticking app for iOS and Android users called My Fare and is looking for beta testers.

The new My Fare app will let riders pay for and validate tickets and passes from their iPhone or Android smartphone. Riders will scan a bar code generated within the app to act as their ticket when boarding their bus, or by showing it to the driver.

The pilot will test the My Fare app on four routes:

Calgary Transit says they need 200 people to test these routes over the next 90 days, starting on June 26.

Requirements for beta testers include being regular riders of the routes listed above, taking them at least three days per week, and to test the app for the full 90 days. Testers need to have a credit card and be willing to pay for a pass within the app and also buy regular tickets, day passes and/or monthly passes during the pilot period. Testers need to be 18 years of age or older (or have parental/guardian permission) and be willing to be contacted by Calgary Transit.

After the 90-day pilot, if deemed successful, Calgary Transit will launch the app in the App Store and Google Play. Support for the rest of the city is planned for mid-2020.

“Calgary Transit is always looking for ways to improve the customer experience, including making paying for transit service easier. As more Calgarians move toward using smartphones in all aspects of their day, it makes sense for us to offer an option to use their phone for payment and display of transit fares,” said the transit agency.

As for paper tickets, they will remain according to Calgary Transit, as the new mobile app is an option “for those who prefer not to use paper or cash.”