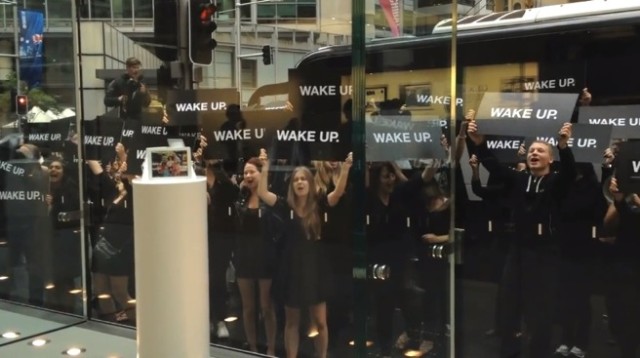 Umm…no comment here but just one giant WTF?! Samsung launched a ‘WAKE UP.” protest outside the Sydney Apple Store in Australia. A black bus pulled up outside and protesters in black t-shirts shouted “WAKE UP.” directly to the store, notes Android and Me:

This week in Australia, Samsung hired a marketing agency called Tongue to conduct some kind of guerrilla marketing campaign where they sent a bus of protesters to an Apple store and taunted people with the message “WAKE UP.”

Check it out below, as captured by YouTube user Blunty3000, who just happened to be outside the Apple Store at the time:

[via Android and Me via Mumbrella]