The DOJ has today proposed a revised punishment for Apple in the ebook price fixing case, arguing that the Cupertino company “changed its in-app purchase rules” to retaliate against Amazon. According to GigaOM’s report, the federal government now wants to make significant changes in the way Apple does business, not just for ebooks, but for all the content it offers, in the iTunes Store.

Originally, the DOJ had suggested that Apple should drop in-app purchasing restrictions for competitors like Amazon, and also restrict publishers from using agency pricing for 5 years instead of 2. But now, the government’s proposal is more focused towards Apple’s policies for in-app purchases, and the way it sells content in general. While arguing at a hearing earlier this month, DOJ also exhibited a Steve Jobs email from 2010, claiming that Apple changed in-app purchase rules to require that any content sold through apps must also be sold through the iTunes Store, and forbid publishers and retailers from sending users to websites outside their apps to make purchases.

As a result, Amazon removed the Kindle Store from its app and retailers like Barnes & Noble and Kobo followed suit. These rules applied to all types of digital content — including magazines and newspapers — not just ebooks. But, the DOJ argues, they were primarily put into place “to make it more difficult for consumers using Apple devices to compare ebook prices among different retailers, and for consumers to purchase ebooks from other retailers on Apple’s devices.”

The DOJ includes Apple’s in-app purchase regulations as an exhibit, and also includes a Steve Jobs email from 2010. It is still trying to regulate Apple’s sales of ALL types of digital content, not just ebooks: It wants the retailer to abandon MFNs or any agreements that would “increase, fix or set the price at which other ebook retailers or retailers of other forms of content can acquire or sell ebooks or other forms of content.” This includes “music, other audio, movies, television shows, or apps.” 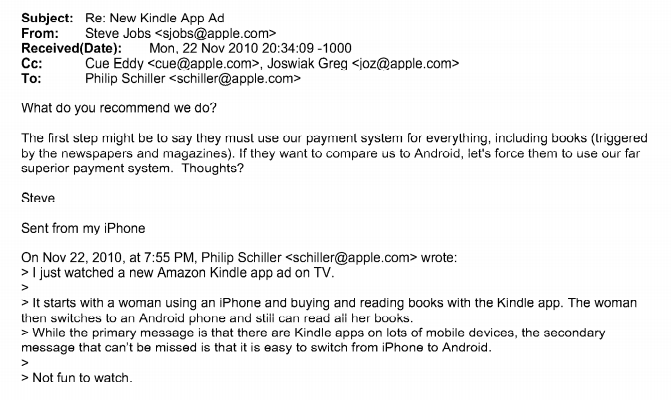 The DOJ says that the proposed regulations are both necessary and prudent to prevent future violations of the antitrust laws from companies like Apple.