After facing a rough ride from MPs at a Commons committee hearing today over their failure to inform nearly 600,000 Canadians that their privacy might have been compromised, Kevin Chan, head of public policy for Facebook in Canada, has offered an apology to those affected. “What is alleged to have occurred is a huge breach of trust to our users, and for that we are sorry,” Chan told MPs on the committee. 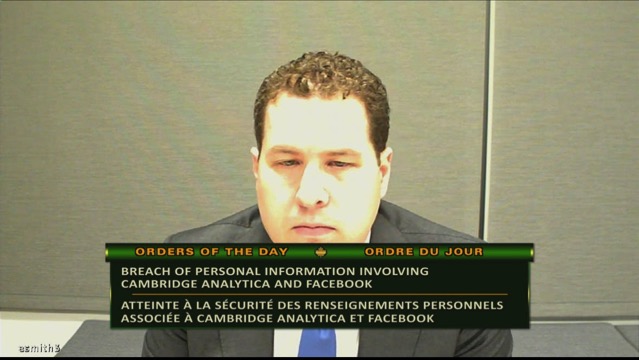 According to CBC News, Robert Sherman, deputy privacy officer for Facebook, also conceded that the company should have been “more proactive in informing users” that their data might have been used by Cambridge Analytica to build psychological profiles so voters could be targeted with ads and stories.

The Facebook executives reassured the legislators that the platform has changed since the breach buyers, with Sherman saying it has restricted access to information and changed its policies.

“When asked if Facebook would voluntarily implement in Canada the principles the European Union is about to enact through its General Data Protection Regulation (GDPR), the Facebook executives waffled. Sherman and Chan said the company was open to sensible regulations and is currently working with Canada’s privacy commissioner.

Conservative MP Peter Kent questioned Facebook’s professed openness to tighter regulations or a strengthened Personal Information Protection and Electronic Documents Act (PIPEDA), saying Canadian MPs were recently warned by Facebook officials in Washington, D.C. that such a move could result in Facebook dialling back its investments in Canada.”

After the hearing, Chan walked away from the committee room refusing to answer questions from reporters.

According to a report from Bloomberg's Mark Gurman, Apple is parting ways with its Vice President of Procurement, Tony Blevins, after the latter was filmed making an inappropriate joke in a viral TikTok video. Blevins was one of Apple's top supply chain executives and one of Tim Cook's most effective cost cutters. Most recently, he worked...
Nehal Malik
27 mins ago