Are you ready to up your Facebook commenting game? Soon you’ll be able to comment with stickers within the iOS app, as the social network has announced the feature is rolling out worldwide “over the next day or so”. The announcement was made by Bob Baldwin employee (on Facebook of course), as noted by TNW:

New on Facebook: You can now send stickers in comments!

Stickers have been a delightful way to communicate in messages, and I’m happy to announce we’re bringing them to comments across Facebook. Just tap the smiley face icon in the bottom-right of any comment field to pick a sticker to send. It’ll be available to all posts from people, in groups, and on events now. I think stickers will allow people to reply to a variety of posts in a more fun way than words alone. You can now easily show your excitement for a post with good news, cheer up a friend who’s feeling down, and express a variety of more nuanced reactions.

Once the feature is available, you should see a smiley face on the right hand side of the text entry box, where you’ll be able to choose a variety of stickers to send: 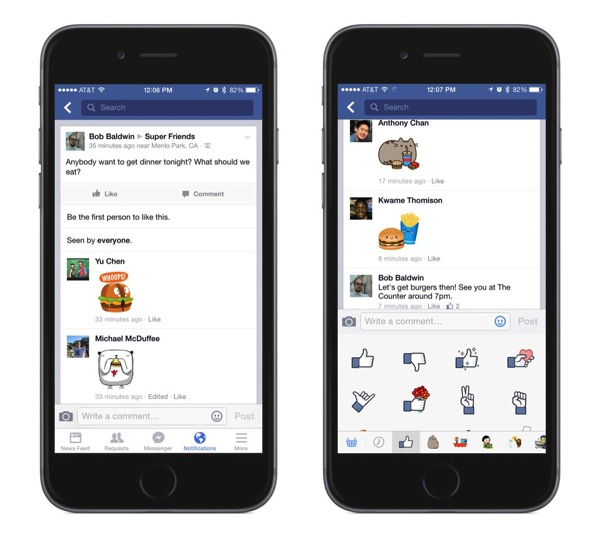 Baldwin explains the stickers project was first created as part of a hackathon project in New York where he built the prototype with another employee in just one night. It was enabled for employees to test first, which saw high praise for the feature. It was then later built for the mobile web, iOS and Android and more versions soon after.

This way of adding stickers to comments is just another way for the social network to get users more engaged and to spend more time on Facebook. Let us know when you see this rollout in Canada. As of writing, it’s not available within the iOS app or within Mobile Safari yet.

Update: the stickers are now live.

Google's Android Security Team has discovered that several Android OEMs, most notably Samsung, LG, and MediaTek, have had their cryptographic app-signing keys leaked (via Ars Technica). Cryptographic signing keys are an integral pillar of Android security. When your phone updates an app, it checks to make sure that the signing key of the already installed app...
Nehal Malik
55 mins ago