Facebook has today announced the launch of a new group video chat feature in Messenger, that allows up to 6 users to video chat in split-screen at the same time. A total of 50 users can listen and talk over voice while sending text, stickers, emojis, and GIFs, or be on camera. Once more than 6 people are on the call, only the dominant speaker is shown to all participants. 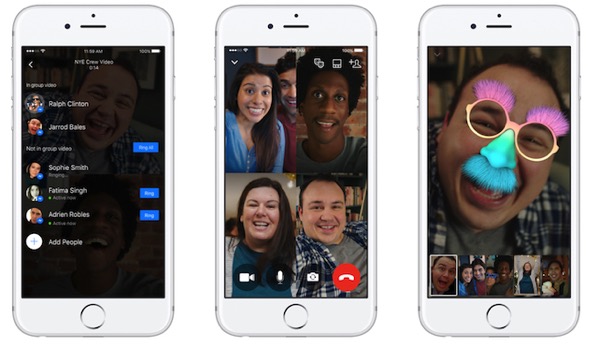 The feature also supports the use of Snapchat-style selfie masks, making it “perfect for those spontaneous moments where text just isn’t enough”. To get started, you’ll need the latest version of Messenger. All you have to do is jump into an existing group conversation, or create a new one. Then tap on the video icon on the upper right of the screen to enter the video chat and everyone in the group will be notified.

“Chatting face-to-face live as a group is perfect for those spontaneous moments when text just isn’t enough… or when you have a major case of FOMO. It’s the best way to share the news you just got a job (or into college), have your kids wish grandma a happy birthday, tell a funny story to the people you love or just see your friends live while wearing fun 3D masks (iOS only for now – Android coming soon) to an everyday conversation”.

Group Video Chat is rolling out worldwide today on iOS and Android devices, as well as the desktop version of Messenger.