According to a report by TheNextWeb, Facebook is testing a new feature that lets you find nearby Wi-Fi hotspots. The social networking giant started asking Pages to list Wi-Fi locations at their physical addresses a little while ago, which seems to be the backbone that the information is built on, notes the source, although it may give inaccurate results in some instances.

“The inclusion seems an obvious fit for a network that’s pushing Facebook live harder than ever. Without a strong internet connection, people have pretty shoddy results when trying to film live video. The more nearby locations Facebook can point you to, the better the quality of real-time information sharing, news, and viral-esque video content becomes. It’s everything Facebook wants from its Live feature”. 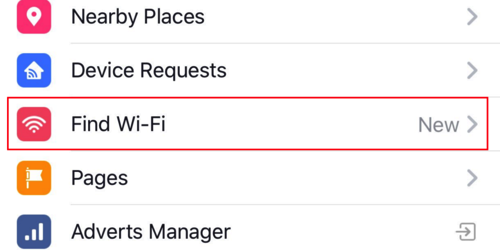 The beta feature has been rolled out to select users on Facebook’s iOS app, with no reports so for of any Android users getting the feature. Nonetheless, the screenshots shown above strongly suggest it should be available to everyone pretty soon. To find out if you’re once of the lucky Facebook users for whom the option has been enabled, check out the hamburger menu in the mobile app.

Can you see the “Find Wi-Fi” option in your Facebook iOS app?

Popular cryptocurrency exchange Coinbase on Thursday announced it had to disable the ability to send NFTs on the iOS version of Coinbase Wallet, the company's mobile crypto wallet app, because Apple wanted a 30% cut of the "gas fees" involved. https://twitter.com/CoinbaseWallet/status/1598354819735031809 Gas fees are essentially transaction fees on the Ethereum blockchain network. They are paid...
Nehal Malik
26 mins ago