While a stand alone Fleksy keyboard app for iOS has previously been available in the App Store, the company has just announced the release of an SDK that lets developers insert the predictive-text input keyboard into their own iOS apps.

“As you know, our mission at Fleksy is to provide “Happy Typing,” and we couldn’t be more thrilled to be one step closer to that goal on iOS. Now, through our SDK, we can be integrated at the application-level of any iOS app. That means any developer can incorporate Fleksy into his app, giving his users the choice to type with our award-winning keyboard.” 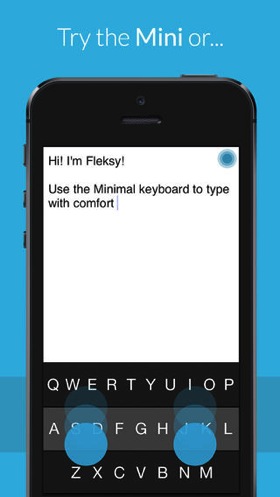 The goal of Fleksy is to go beyond what smartphone makers offer out of the box, speeding things up where possible and simplifying others. Fleksy’s creators go so far as to say you can even type on it without looking, like people do on physical computer keyboards. There are currently four apps that have already taken advantage of the Fleksy SDK i.e BlindSquare, GV Connect, Launch Center Pro and Wordbox.

Developers interested in integrating Fleksy into their apps should hit up this link.