The reason for introducing these upcoming ‘gallery’ ads? Aside from yet another revenue stream, Google says it’s because users shop in quick sessions, such as when they’re on the porcelain throne:

The company wants to make it easier for users to discover and buy new products because they shop in brief spurts while watching TV or sitting in the bathroom, said Oliver Heckmann, vice president of engineering for Travel and Shopping.

“It actually changed with mobiles and what users expect from an online service like Google,” he said.

Here’s what Discovery ads will look like, according to Google, set to roll out globally later this year: 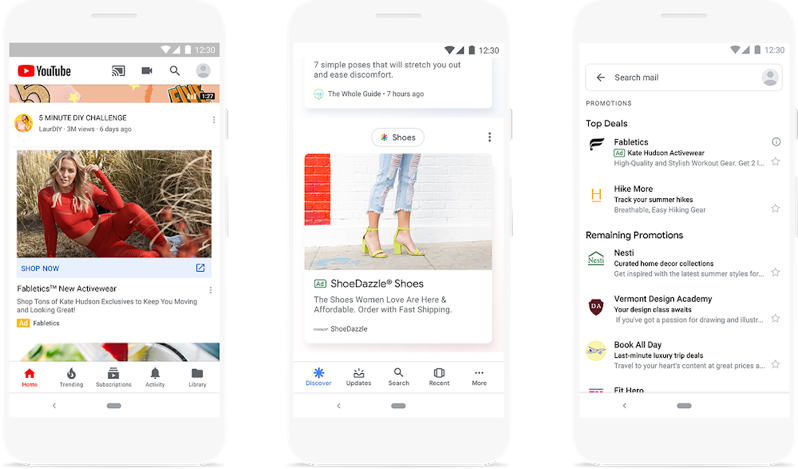 These new ads will have “rich and relevant creative” explains the company, which will “Inspire consumers with an open canvas showcasing your brand or products in a swipeable image carousel, rendered natively across each Google property.”

The Discover feed is based on algorithms to show what is relevant according to a user’s preferences and ads were tested last fall. Google said at the time over 800 million people monthly were using the Discover feature.

Ads within the Discover feed will be more visual and said to generate more clicks and interest, said Google, announcing the news at its Marketing Live conference for advertisers.

Google, you know us too well, damn it. I know of people who browse the Discover feed in the bathroom and shop on Amazon at the same time (that person may or may not be this author). Who doesn’t?!