Google has started rolling out a new ‘Heads Up’ feature to Google Pixel users with the latest Digital Wellbeing beta update. According to XDA Developers, the feature alerts users to keep their heads up while walking to avoid any accidents. 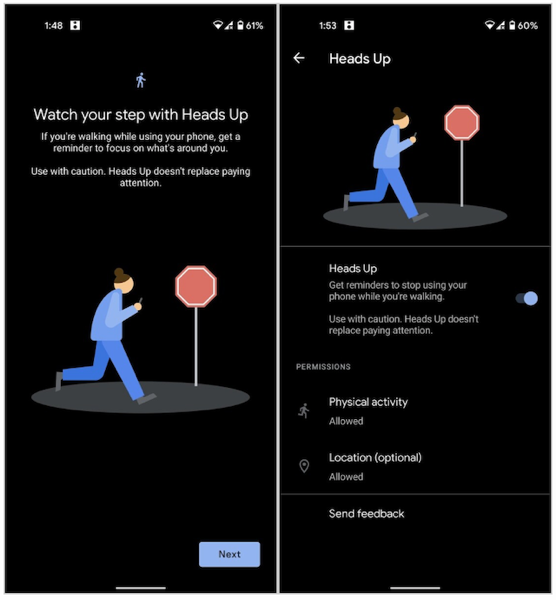 The new Heads Up feature is located inside the Reduce Interruptions section of the Digital Wellbeing app settings. Once it’s enabled, you can find a couple of additional settings within the same section.

The feature setup screen says: “Watch your step with Heads Up…If you’re walking while using your phone, get a reminder to focus on what’s around you. Use with caution. Heads Up doesn’t replace paying attention.”

Tapping on the ‘Next’ button at the bottom of this screen begins the setup process, after which the feature shows a pushes a reminder every time you use your phone while walking.

The feature seems to be rolling out only on Google’s Pixel devices with the latest Digital Wellbeing beta update. If you haven’t received it yet, you can update to the latest beta release by following the Play Store link below and joining the beta program

Apple has lifted its embargo on the first reviews and unboxing videos of its new 6.7-inch iPhone 14 Plus, which goes on sale this Friday, October 7, 2022. Normally, Apple embargo reviews have been published in the early morning, but with Google’s Pixel 7 event set to start Thursday morning at 7am PT/10am ET, the […]
Gary Ng
38 mins ago