Google has just announced the launch of its second generation of Pixel smartphones, the Pixel 2 and Pixel 2 XL, both of which lack a dedicated headphone jack, like last year’s iPhone 7 and 7 Plus (#courage). The new Pixel phones feature OLED displays, front-facing stereo speakers, Snapdragon 835 processors, 4GB of RAM, Android 8.1 Oreo and an option for 64GB or 128GB of storage. 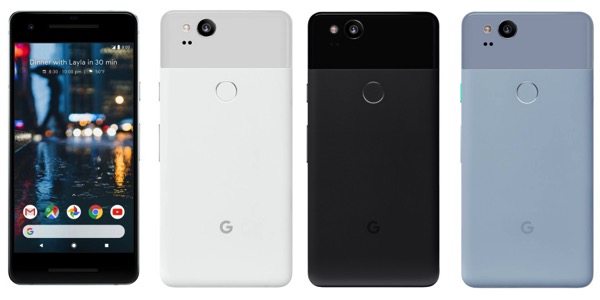 The Pixel 2 sports a 5-inch, 1080p display with a 16:9 aspect ratio, whereas the larger Pixel 2 XL packs a 6-inch, QHD+ display with an 18:9 aspect ratio. Other highlights include an 8-megapixel front-facing camera, a 12-megapixel rear camera, a fingerprint scanner on the back, and a USB-C port at the bottom. Regarding the lack of a headphone jack, Google says “Use your existing analog headphones with the included adapter”.

“The Pixel 2s have a music recognition feature that is always on, Google’s director of product management Sabrina Ellis revealed. Whenever music is playing nearby and the second-generation Pixel recognizes the song, it will automatically show the artist and title on your lock screen.