Google has announced its Stadia online gaming service will launch tomorrow with 22 games, instead of its initial number of 10 games. More games will be coming by the end of the year as well.

“In addition, gamers will be able to claim both Destiny 2: The Collection and Samurai Shodown as part of the November Stadia Pro subscription,” explains Google.

Here’s the full list of 22 Stadia games at launch: 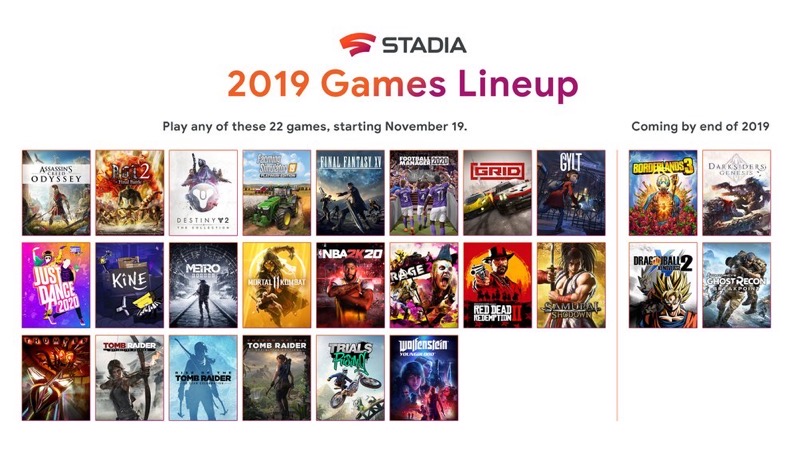 As for more games coming in the next six weeks, Borderlands 3, Tom Clancy’s Ghost Recon: Breakpoint, Dragon Ball: Xenoverse 2 and Darksiders Genesis will arrive on Stadia. In 2020, players can expect Doom: Eternal, WatchDogs: Legion, Gods & Monsters and Cyberpunk 2077 on Stadia.

Earlier today, the first reviews of Stadia were published online, with mixed reviews, with reviewers saying there was lag and also “unplayable at times”.

Google Stadia was unplayable at times. That won't be acceptable for any gamer.

But it's hard to "review" Stadia since it's an ongoing service. It's like reviewing YouTube on its first day.

But if we were to talk about what it is now: It's not good.https://t.co/wmhy6yONDm

Google Stadia will launch in Canada for $11.99 CAD per month. The streaming gaming service will also debut this month in the U.S., Belgium, Denmark, Finland, France, Germany, Italy, Ireland, Netherlands, Norway, Spain, Sweden, and the U.K.