Google To Cough Up $22.5 Million Over Safari Privacy Breach 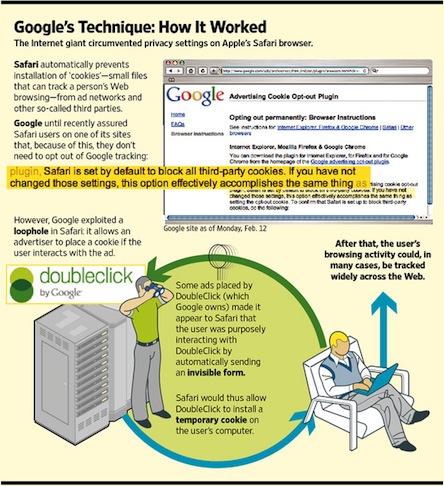 A scandal involving Google and Apple’s Safari first began back during February when the Wall Street Journal first reported Google was ‘tricking’ Safari into accepting tracking cookies. According to the WSJ, here is how it all played out:

The companies used special computer code that tricks Apple’s Safari Web-browsing software into letting them monitor many users. Safari, the most widely used browser on mobile devices, is designed to block such tracking by default.

Google disabled its code after being contacted by The Wall Street Journal.

Then early last month, the WSJ hinted that Google was close to a deal worth $22.5 million. Turns out, the deal has closed and $22.5 million will be paid “to settle Federal Trade Commission charges.”

Bloomberg even notes this breaks a record:

The fine, the largest ever the FTC has levied against a company, represents the first by the agency for a violation of Internet privacy as the agency steps up enforcement of consumers’ online rights.

This comes as a reminder all companies must abide by FTC rules, says FTC Chairman Jon Leibowitz:

No matter how big or small, all companies must abide by FTC orders against them and keep their privacy promises to consumers, or they will end up paying many times what it would have cost to comply in the first place.

If you’re still confused on Google’s wrongdoing, check out the graphic above. It should clear all your questions up.