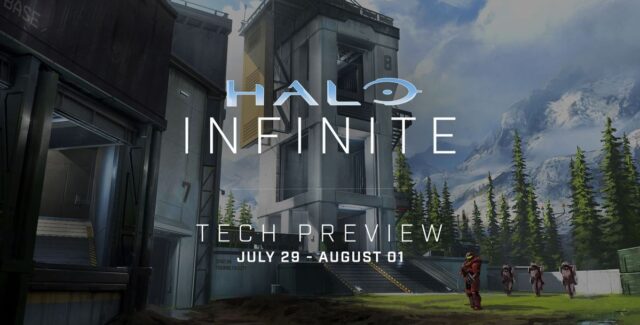 Xbox and 343 Industries is holding the first Tech Preview for Halo Infinite‘s multiplayer this coming weekend. From July 29 through to August 1, those selected to join can be the first to try out the game’s multiplayer prior to launch.

Halo Infinite is expected to launch later during the holiday season this year. Before launch, 343 Industries wants to give a select number of players the chance to try out the gameplay and new array of weapons. And so, the first Tech Preview for Halo Infinite will include a way to test the gameplay versus AI bots. Additionally, players will be able to test out weapons via the Weapons Drill mode.

In a blog post published by the studio, the Tech Preview will “gather feedback on Bot behaviour and online performance” through arena gameplay versus the AI bots. The preview will cover the traditional Slayer game type and will put four players against four bots. Three maps dubbed Bazaar, Recharge, and Live Fire will be playable in the first preview. The developers have said PVP Arena and Big Team Battle will be included in future previews.

Halo Infinite’s multiplayer will feature the franchise’s first gun range, the Weapons Drill mode. It’s here that players can test out weapons prior to entering a game mode. Moving and strafing bots will be featured on the range for target practice. Players can begin learning the finer intricacies of the weapons such as fire rate, reload speed, etc. Additionally, Weapon Drills will feature different difficulty levels and a star rating system.

The list of weapons accessible in the Tech Preview include:

In order to participate, players will have to sign up to be a Halo Insider and opt-in for flighting on PC and console. 343 Industries will be holding a live stream today at 5 PM ET to showcase more of what to expect come this weekend.

Tomorrow, we’re going live with the first look at #HaloInfinite’s upcoming technical preview! Hear directly from the team about what’s in store, and how you’ll get in if you’re selected.

Halo Infinite is expected to release on PC, Xbox One, and Xbox Series X/S later this year. The multiplayer portion will launch as a free-to-play offering for players.