Here’s a History of Apple SoCs and A8 Predictions

Engineer Chris Jenkins has started an interesting and highly detailed thread on the MacRumors Forums, discussing what to expect from the upcoming iPhone 6, the history of Apple SoCs and predictions for Apple’s A8 CPU. Beginning with how the Cupertino company sourced Samsung SoCs for the iPhone prior to the A4, the author details each custom SoC in depth, building up to his predictions for A8. 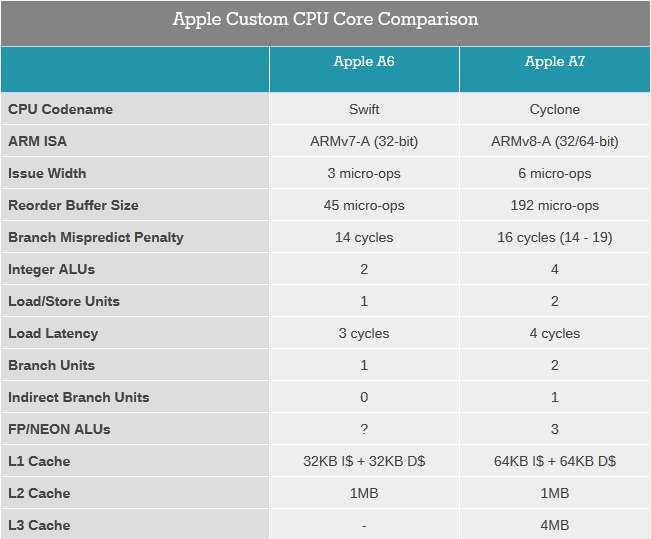 Jenkins notes that he did an A7 prediction thread last year, which proved to be “almost exactly on for the GPU, just narrowly missing on operating frequency”, but getting the configuration correct. He also accurately predicted the cellular radio and transceiver. Now, Jenkins says that his A8 CPU prediction is “rather mild”. He predicts that a move to 20nm from 28nm will certainly help in terms of transistor density and speed for the same amount of power.

“Apple’s history of extremely modest clock speeds suggests we’ll see little movement on this front again. For the iPhone, Cyclone stayed at the same 1.3 GHz that Swift was rated at.

It will be quite tough for Apple to achieve a third consecutive 2x benchmark improvement claim unless they significantly increase clock speeds. I feel that it is much more likely that Apple will make small but meaningful improvements to the existing Cyclone design, potentially addressing what they feel are its biggest shortcomings. Examples of what this might include are a better branch predictor, more custom extensions to the ARMv8-A ISA to speed-up frequently used operations, memory latency time reductions, or reductions of cycles needed for complex ALU operations.”

Below is a full list of A8 predictions by Chris Jenkins:

For more technical details on all Apple custom SoCs released till date, hit up the source link.