Instagram has today announced that starting today, it is removing the ‘Following’ tab for all users as the feature has become more of a “stalking tool” rather than aiding users with new account discovery, TechCrunch is reporting. The company says the Explore tab is now its go-to place to find new accounts, hashtags, and places to follow. 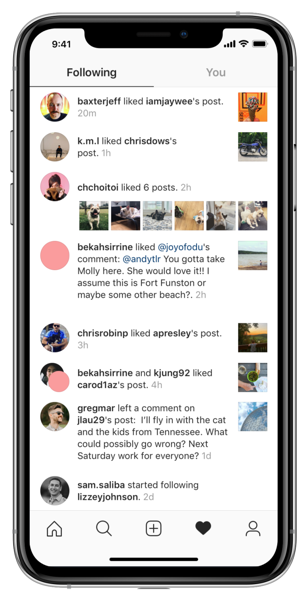 The Following tab was often referred to as a place where “micro-cheating” activity was caught as it could reveal when a person in a committed relationship was spending just a little too much time liking or engaging with someone else’s posts, such as models or celebrities for instance.

The feature was also known to have impacted friendships like in the case where someone wouldn’t respond to their friend’s texts or claim they were “busy” while they were consistently active on Instagram.

Gossip followers also liked the tab, as it would reveal who celebs were following — sometimes an indication of a new relationship, either personal or professional in nature. Overall, the tab generally became known as a creepy tool, and not one that offered any significant benefit to users in terms of being a legitimate discovery mechanism.

After the tab’s removal, you’ll only see your own activity, as before, when you click the Heart button.

While many users have already lost the Following tab, Instagram says it will take the rest of the week for the rollout to complete.

Apple earlier this month unveiled Apple Watch Ultra, the tech giant's highest-end smartwatch to date. The premium smartwatch carries a starting price of $1,099 and is geared towards extreme athletes and adventurers. Apple Watch Ultra is designed to be the perfect companion for when you're far away from civilization, whether you're below sea level or...
Nehal Malik
33 mins ago