According to latest data collected by web and advertising analytics firm Chitika, iOS 7 is now responsible for 74% of all internet traffic originating from iOS devices in the U.S. and Canada. In comparison, only 22% of web traffic originated for iOS 6 in the region. The data was obtained from millions of ad impressions served to iOS devices in North America between Oct. 25 and Nov. 18. 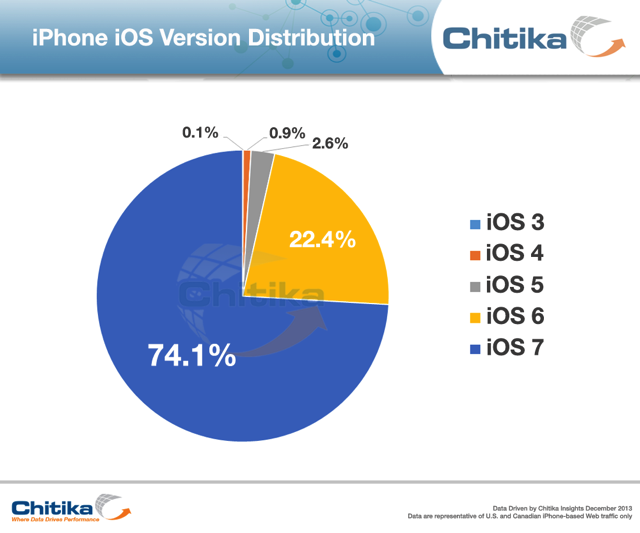 It has taken only 3 months for Apple’s latest iOS 7 to surpass the 70% iOS share. For iOS 6, it took almost six months to reach a similar mark, following its release in September 2012. The report also points out that iPhone users are slightly more likely to have updated to the latest OS version as compared to iPad users. The iOS 5- equipped original iPad users still generate 9% of total North American iPad Web traffic.

“The latest analysis again underscores that iPhone users, and iPad users to a lesser extent, update at extremely high rates, acting as a distinctive selling point when it comes to attracting application and mobile Web developers to the platform. While still-active legacy devices make it unlikely for iOS 7 adoption to substantially surpass the nearly 90% adoption rate of iOS 6, the latest operating system will likely reach that point in a much quicker timeframe than its forerunner.”

Have you upgraded all your iOS devices to iOS 7 yet?