Known for modifying iPhones with gold platings and rare gems, Moscow-based jeweler Caviar latest project is a $70,000 custom iPhone 11 Pro that not only features a half-kilo of gold and 137 diamonds but also has a tourbillion watch built into the backplate with concentric circles of gold and diamonds (via CultofMac). 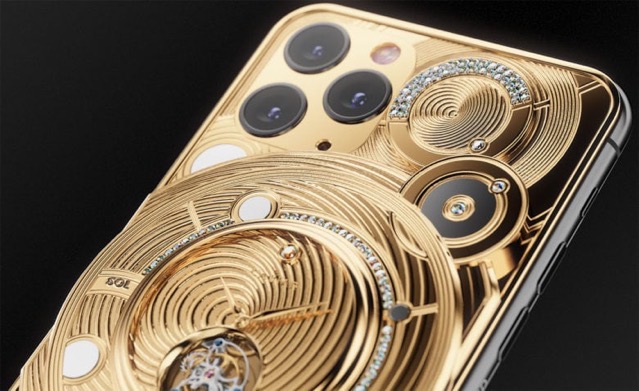 Caviar’s iPhone 11 Pro ‘Solarius’ also features a yellow diamond, also called the sunstone, on the tourbillion watch face. Although Caviar says it is the most expensive iPhone in the world, the company is not including a security guard with the purchase.

Some of the other handsets currently available in Caviar’s Discovery line include iPhones with pieces of meteorite, certified as originating from Mars and the moon. A limited run of 99 iPhone 11 Pros also includes pieces of the Tsarev meteorite.

You can learn more about Caviar’s creations at this link.