According to industry data provider Counterpoint, Apple iPhone 12 mini sales in the U.S. sales are slowing doing considerably, with the device getting just 5% of overall sales of its new phones during the first half of January, Reuters is reporting. 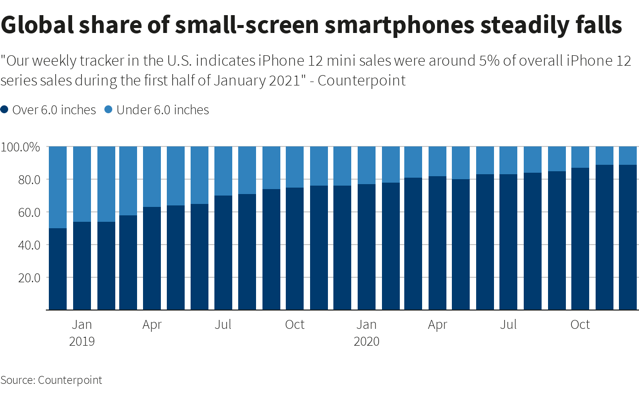 Last week, J.P. Morgan’s William Yang noted that weak demand for smaller iPhones might lead Apple to stop production of the mini in the second quarter. “The product mix adjustment is well expected by investors and should not be a negative surprise,” Yang added.

“This is in line with what we’re seeing in the broader global market, where screens under 6.0” now account for around 10% share of all smartphones sold,” noted the analyst.

Apple launched a smaller variant of the iPhone 12 model last year, but demand for the smaller smartphones seems to be weaker, compared to the high-end iPhone 12 Pros and the older iPhone 11s.

Last month, Apple reported $65.60 billion in quarterly revenue from its iPhone business, beating its previous record from three years ago.