A new survey carried out by camera app IceCream has shown that majority of iPhone customers are choosing to buy the cheapest storage options possible, only to find that 16GB simply isn’t enough. According to BusinessInsider, the survey asked UK mobile carrier Telefonica/O2 about iPhone storage space in the UK and found out that 91% of iPhones in the country have 16GB or less of storage. 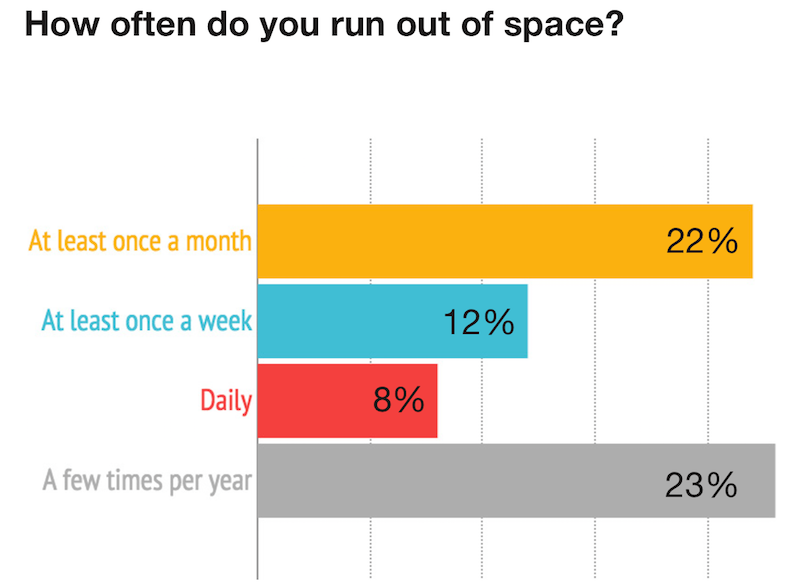 While 16GB may sound like a lot of storage space, it gets filled up pretty quickly on an iPhone. The survey, which covered a mix of phones from the iPhone 5S, and 5C, through to the iPhone 6, showed that 8% of iPhone users run out of storage every single day, while 22% of survey respondents said they run out of space at least once a month. The survey also found that 41% of people have over 500 photos on their phone.

“On average, a photo taken on an iPhone is going to be around 2MB in size. Having 500 of them on your phone can use up a gigabyte of storage space. And Apple’s new method of storing photos means it’s far more difficult to actually clear out your photos, meaning people are often stuck with more images clogging up their device than they realise.

But it’s not just photos that are taking up room on iPhones. Even Apple’s own software updates are causing a problem. The recent iOS 8 update to Apple’s mobile software required a giant 4.6GB of free space on your phone in order to install. Most people don’t have that much free space, so they were stuck using an outdated version of the operating system until they could connect to a computer”.

How often do you face the problem of running out of space on your iPhone?