iTunes Accounts Spent an Average of $3.29 in Last Quarter, Down 24%

In an investor note issued to clients earlier today, Morgan Stanley’s Katy Huberty has claimed that each of Apple’s iTunes accounts spent an average of $3.29 during the last quarter, which is down 24% year over year, Fortune is reporting. “Online services is an underappreciated growth and margin lever for Apple”, the analyst wrote, adding that this raises concerns about Apple’s “ability to monetize the new base of emerging market customers”. 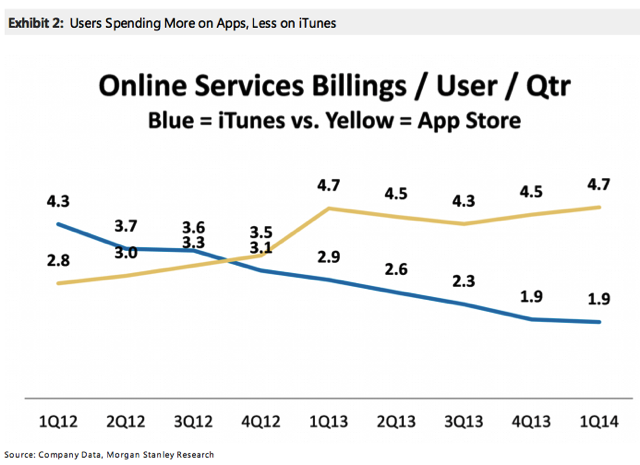 Huberty however predicts that by the end of 2014, App Store sales will have more than taken up the slack, as the analyst sees several ways Apple could tap into its 800 million iTunes accounts, most of which are attached to credit cards. The three new opportunities she believes the Cupertino company has to boost its iTunes sales are streaming music, mobile payments and iWatch.

Streaming music: Press reports… suggest Apple is considering the purchase of Beats Electronics, which would give Apple an accessories business focused on headphones and a music streaming service.

Mobile payments: While there is always the possibility Apple adds mobile payments purely as a vehicle to increase customer loyalty and sell more devices, we believe it’s more likely to become a revenue generating service.

iWatch: We believe Apple could ship 32-58M iWatch units in the first 12-months based on user base penetration of iPhone (low-end) and iPad (high-end). In 2013, the average user spent $18 on the App Store. Assuming the iWatch generates another $9 per year, this adds $43-80M of net revenue.

Even more interesting is the fourth opportunity highlighted by Asymco’s Horace Dediu:

“Apple’s Services revenues are growing remarkably quickly. The number of users is over 800 million. Do you see an opportunity for services to become a more independent business at Apple? In other words, why not bring iTunes to Android?”

Do you see Apple bringing iTunes to Android in the near future? Keep in mind that the iPod really took off several years after its release when Apple finally brought iTunes to Microsoft Windows.

Following the acquisition of animation production company Dynamo Pictures, Nintendo has launched a brand new website for its 'Nintendo Pictures' branch. At the time of the acquisition, it was known that Nintendo had plans to rename the Japanese company. Nintendo also previously announced its intentions to utilize the company's specialties to focus on  "producing visual...
Steve Vegvari
19 mins ago