Market analyst Sensor Tower’s latest consumer spending report for 2019 has revealed that iOS and Android mobile players spent nearly $61.7 billion on games last year, a number that is up 12.8% from 2018 and represents 74% of mobile spending for the year (via VentureBeat). 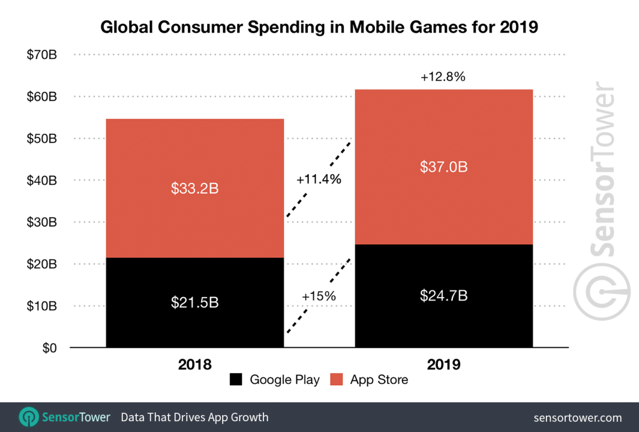 The report also shows that games made up 68% of revenue for iOS while making up 84% for Android. Mobile gamers also downloaded a lot of games in 2019, with mobile game installs reaching 42.1 billion in 2019, up 9.9% from the year prior.

Call of Duty Mobile for iOS was the most popular game in terms of revenue, whereas battle royale shooter Garena Free Fire was the most downloaded title for Google Play.

Call of Duty mobile launched in October and got off to a fast start, earning 180 million downloads across both stores in Q4 2019. That is the best quarter for a mobile game since Pokémon Go‘s launch in Q3 2016. Sensor Tower also notes that the industry is seeing healthy competition. Among all publishers, none of them have more three games among the top 20 titles by overall downloads in Q4.

With mobile representing the largest sector of the gaming industry, the numbers certainly reflect a healthy growth for gaming.