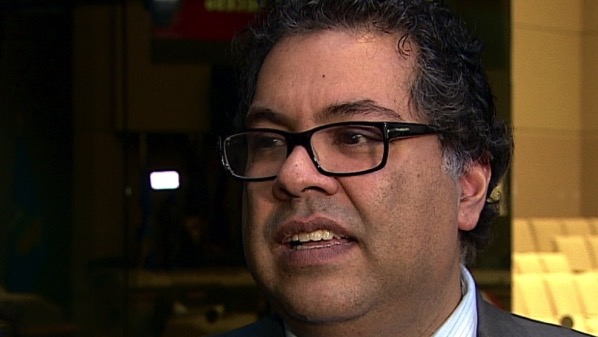 In a leaked Periscope video that surfaced on Friday showing Calgary Mayor Naheed Nenshi using a ride-hailing service called Lyft during a recent business trip to Boston, the Mayor is seen making some jaw-dropping comments about Uber, CBC News reports. “Uber, there is no polite way of saying this, has a brilliant business model and are dicks”, he said. Below is an excerpt from his conversation with the driver, not knowing that he is being recorded:

“They are honestly the worst people in the world. I have never dealt with people like this before,” Nenshi said of Uber officials.

“I was at a conference and I met Travis, the CEO, and I was like, ‘Oh, it’s because you are a dick and this has percolated through the entire organization,'” he continued. “We sent people to sign up to be Uber drivers to see if they could get through the background check,” he said.

“How we found registered sex offenders and people with convictions for violent crimes? I don’t want to know why we know those people … but they all made it through the theoretical background screening.

Having caught on candid camera and undoubtedly off-guard, Mr. Nenshi is now apologising for the language he used. Here’s the statement he issued the following day:

“I’ve called them “jerks” publicly in the past, but this time I used a more colourful term. As a guy who very rarely swears, this is probably as rude as I get, but it still wasn’t very nice or civil of me. I apologize to Travis Kalanick, CEO of Uber, and his employees for my being, well, a jerk.

[…] Watching the video, I realize that I did not explain myself clearly at all. I apologize for any confusion that I have caused.”

Uber, responding to Nenshi’s comments, said in a statement that it’s disappointing to see the Mayor “stoop to name calling and questionable tactics”. “We hope this can give way to a more constructive conversation that benefits the riders and drivers of Calgary”, Uber spokesperson Jean-Christophe de Le Rue said.

Your thoughts on the incident guys?