Last month Netflix revealed during its Q1 2014 earnings call a price hike was coming soon for new subscribers, a jump of either $1 or $2, set to take place before June 30.

Looks like Netflix has held onto its promise as an email out to subscribers has revealed new members will now pay a $1 increase at $8.99 for their subscriptions. Meanwhile, existing users get to stay at $7.99 per month, guaranteed for two years, says the company.

Check out the following email we received: 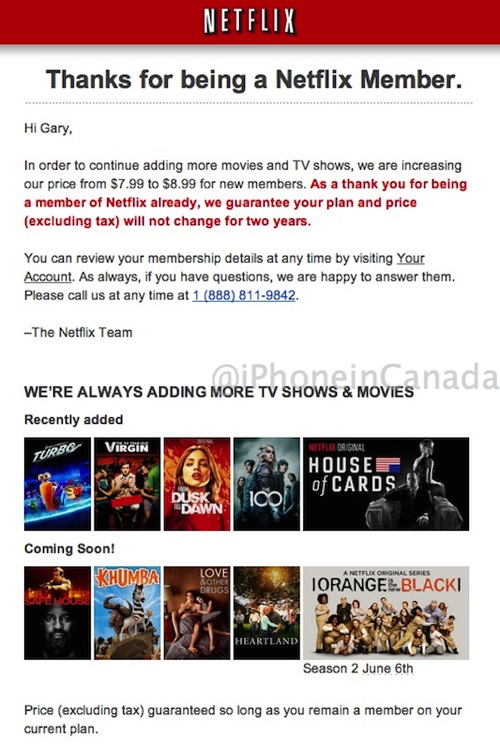 The rationale for the $1 price hike? Netflix says it’s a way for them to add more movies and TV shows. If you’re upset about the price increase—$1 more per month works out to an extra 3.3 cents per day. You spend $5 for a latte at Starbucks.

Despite the price increase, Netflix hasn’t updated pricing on their website yet, as it still shows $7.99/month. Click here to sign up for Netflix if you haven’t already and start saving $1/month.

Update: Netflix says on its blog there will be a new $7.99/month SD streaming option:

We are also introducing a new $7.99 plan with SD-quality viewing on any one screen at a time. As always, members can change plans at any time. New members get a free trial of whichever plan they prefer.