A fully operational original Apple computer, which was sold by Steve Jobs himself back in 1976 in his parents’ garage for $600, will be auctioned next month, where it is expected to sell for over half a million dollars. Reuters reports that the “Ricketts Apple-1 Personal Computer”, which is named after its original owner Charles Ricketts and being sold on December 11, will likely hit the $600,000 mark. 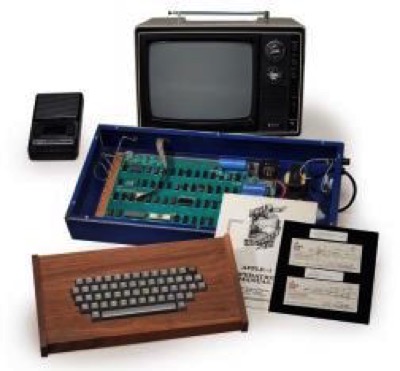 At the age of 21, Steve Jobs is said to have sold the unit directly to an individual from the Los Altos, California family home. “It all started with the Apple-1 and with this particular machine,” said Andrew McVinish, Christie’s director of decorative arts. The computer is being sold by Robert Luther, a Virginia collector who bought it in 2004 at a police auction of storage locker goods without knowing its history.

“I knew it had been sold from the garage of Steve Jobs in July of 1976, because I had the buyer’s canceled check,” Luther wrote on a kickstarter page soliciting funding for a book on the machine’s history. “My computer had been purchased directly from Jobs, and based on the buyers address on the check, he lived four miles from Jobs.”

The computer will be sold with the canceled check for $600 from the original garage purchase on July 27, 1976 made out to Apple Computer, which Ricketts later labeled as “Purchased July 1976 from Steve Jobs in his parents’ garage in Los Altos”.