A new patent infringement lawsuit concerning Apple’s latest A7 processor and the products that it powers, has been filed by the Wisconsin Alumni Research Foundation (WARF), alleging that Apple has incorporated the technology of WARF’s ‘752 patent into its newest processor to achieve enhanced efficiency and performance, PatentlyApple reports. The A7 processor currently powers the iPhone 5S, the iPad Air, and the iPad Mini with Retina Display. 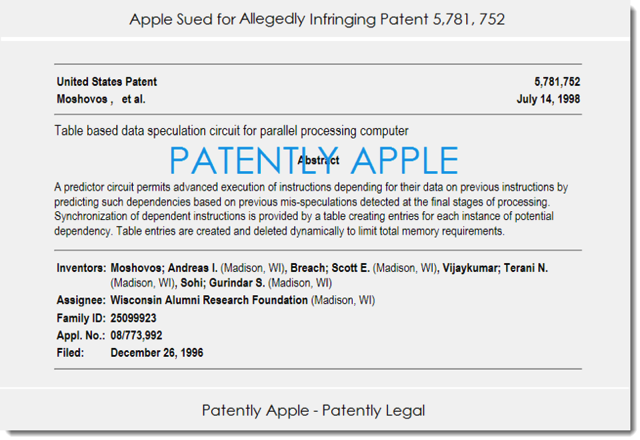 WARF has filed a formal complaint before the court stating that Apple must be prevented from unauthorized use of the ‘752 patent. The source notes that Apple has filed one or more patent applications that cite the ‘752 patent as relevant prior art, ever since the issuance of the ‘752 patent. Apple has stated that it is the policy of the company not to accept or consider proposals regarding licensing from outside entities like WARF for any purpose, making the initiation of this lawsuit a necessity.”

The patent-in-suit is United States Patent No. 5,781,752 (the “‘752 patent”), entitled “Table Based Data Speculation Circuit for Parallel Processing Computer” was granted to inventors Andreas Moshovos, Scott Breach, Terani Vijaykumar, and Gurindar Sohi. The inventors are leading researchers in the field of computer microprocessor architecture.”

The complaint further requests that the court triple the damages against Apple should they be found guilty of patent infringement. So far, no Judge has been assigned to the case.

Google today unveiled its long-rumoured smartwatch, the Pixel Watch, during the 'Made by Google' launch event. Pixel Watch features a circular design with a curved top that gives it a dome-like appearance. The screen is protected by a Custom 3D Corning Gorilla Glass cover that's tough and scratch-resistant. Google's Pixel Watch comes with an always-on...
Nehal Malik
46 mins ago