A petition urging Prime Minister Justin Trudeau to ban Chinese company Huawei from Canada’s 5G networks, has reached nearly 30,000 signatures in three weeks (29,117 as of writing), according to the Epoch Times. 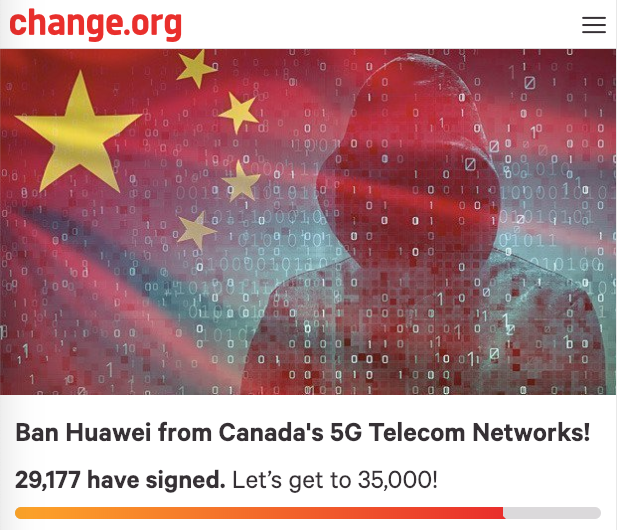 The change.org petition was started by David Morrish in Vancouver, B.C., who runs MBS Tech, a cyber security services provider for enterprise clients.

In his petition, Morrish writes:

I am calling on all you of you to sign this petition to have Huawei removed from Canada’s critical infrastructure. This includes banning Huawei from participating and or building Canada’s 5G Networks and all STEM fields and or industries.

Almost all of our allies have banned or removed Huawei from their critical infrastructure and it’s time we do the same!

Morrish’s petition links back to various Canadian news stories about the alleged dangers of Huawei and how American allies have repeatedly stated the dangers of the Chinese company, with its apparent ties to the Chinese Communist Party.

“Ban Huawei Now! They are targeting our intellectual property and stealing years of hard work with the goal of selling it back to us at a lower cost!” says Morrish, referring to the allegations Huawei had stolen Nortel IP.

“Stop Telus, Bell, and others from partnerships that harm our National Security!” writes Morrish. Canada’s Five Eyes allies, including the United States, Australia and New Zealand, have already banned Huawei from telecom networks.

Canada’s security review of upcoming 5G networks is still “beyond weeks” away, according to the federal government. A decision on whether to ban Huawei or not will most likely be made after an extradition decision is made regarding the latter’s CFO, Meng Wanzhou, currently on bail in Vancouver.

The U.S. has officially requested extradition of Meng from Canada, who is charged with alleged financial fraud and for violating U.S. sanctions against Iran. She is set to return to court on March 6 and Canada has the decision to make to decide whether or not to proceed with her extradition.

Some Canadians recently voiced concerns over the Huawei partnership Telus and Bell have with the company, as existing networks use the Chinese company’s equipment and 5G plans are next.