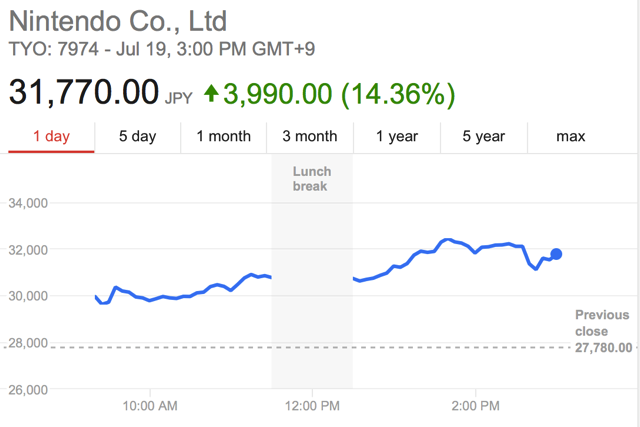 According to a Reuters report, Nintendo’s shares have more than doubled since the launch of Pokémon Go in the United States. The Japanese firm’s shares soared another 14% today, more than doubling the firm’s market capitalization to $42.5 billion in just seven sessions since the smash-hit game’s initial launch over a week ago. Nintendo shares ended Tuesday up 14.4% at 31,770 yen, bringing its gains to more than 100% since July 6.

The phenomenal success of Pokémon Go – now available in 35 countries, the majority in Europe, and most recently in Canada – has triggered massive buying in Nintendo shares, surprising even some seasoned market players. “I’ve never seen the trend of such a big company’s shares changing so quickly in such a short period of time,” said Takashi Oba, senior strategist at Okasan Securities.

The success of Pokémon Go has boosted hopes that Nintendo could capitalize on a line-up of popular characters ranging from Zelda to Super Mario to strengthen its new foray into augmented reality. While augmented reality has been a focus of the market but hardly anyone was expecting Nintendo in this area. “Suddenly Nintendo has become an AR-related stock,” said a fund manager at a Japanese asset management firm.

Apple’s upcoming “M2 Max” chip was once again spotted on Geekbench's database on Thursday, this time indicating a more respectable jump in performance as compared to its predecessor, the M1 Max. Last week, the M2 Max chip showed up on Geekbench with a single-core score of 1,853 and a multi-core score of 13,855. The M1...
Nehal Malik
16 mins ago