As confirmed by a Facebook spokesperson, the company is testing the option to cross-post Stories to Instagram in an effort to make it easier to share moments with a broader audience as people may have different followers on Facebook as compared to Instagram (via TechCrunch). 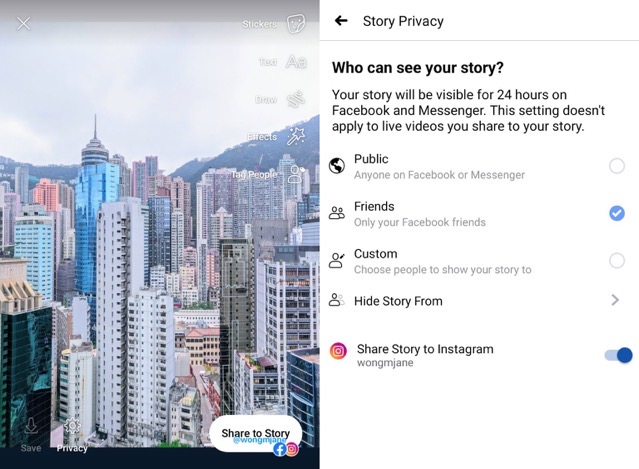 The above screenshot, reverse-engineered from the Facebook for Android app code by Jane Manchun Wong, shows how the Facebook-to-Instagram cross-posting feature might work.

It appears that before posting a Facebook Story, in addition to the Public, Friends, Custom and Hide From options, you’ll be able to choose whether you want to share it to Instagram as well by using a toggle that will turn on continuous cross-posting of that post and future ones.

“With any luck, Facebook and Instagram will eventually sync up data about which Stories you’ve watched on either app, and avoid showing you exact copies of ones you’ve already seen. I made my case for this to Instagram’s leadership at a recent press dinner, noting how reruns waste hundreds of millions of people’s time and lead them to close Stories or the app altogether.”

Facebook’s latest move could be a precursor to the company’s efforts efforts to unify its Messenger, WhatsApp, and Instagram Direct chat features.