Earlier this morning RIM announced its new smartphones around the world via simultaneous live events, unveiling the BlackBerry Z10 and Q10 models. Also, RIM rebranded the company and is now known as just BlackBerry (its stock ticker is now BBRY). Watch the video below to learn all about the change:

In his review of the Z10 on The Verge, Joshua Topolsky says:

The Z10 is a good smartphone. Frankly, it’s a better smartphone than I expected from RIM at this stage in the game. It does everything a modern phone should do, usually without hesitation. It doesn’t do everything perfectly, but it does many things — most things — reasonably well.

The problem with the Z10 is that it doesn’t necessarily do anything better than any of its competition. Sure, there are arguments that could be made about how it handles messages or the particulars of its camera, but no one could argue that there’s a “killer app” here. Something that makes you want or need this phone because it can do what no other phone can do. That’s not the case — in fact if anything is the case, it’s that the Z10 can’t yet do some things that other devices can. Or at least, can’t do them quite as well.

The BlackBerry Q10 has a design many are familiar with as it houses the ubiquitous keyboard many have known to love. It comes with a 3.1-inch 720×720 touchscreen display, powered by a 1.5GHz processor, 2GB of RAM and 8MP and 2MP cameras respectively. 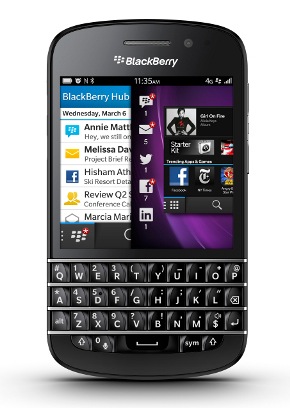 The BlackBerry Z10 is a smartphone BlackBerry (formerly RIM) has created to finally make it into the same conversation with the iPhone and Android offerings, but it is still too early to tell how it will fare in the marketplace. As of writing, investors have pushed the stock down 6%.

What do you think of these new offerings from RIM? Will you make the switch (back) to a BlackBerry?

Update: Click here to see and hear what RIM has ‘learned’ from the iPhone.