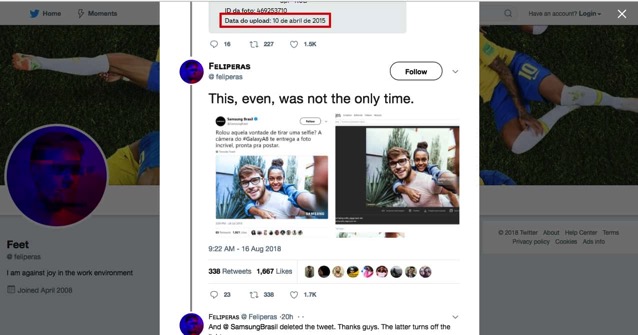 In a recent promotional campaign on Twitter, Samsung Brazil used stock photos shot with DSLR cameras to tout the camera of its Galaxy A8 smartphone.

The South Korean company, however, got busted when Twitter user Feliperas presented the evidence, by tweeting screenshots of Samsung’s tweets alongside the same photos found in the online archive for Getty Images (via CultofMac). “Who are you trying to fool, Samsung Brazil?”, he tweeted.

Samsung Brazil immediately removed the tweets and offered the following explanation to the whistleblower (via DesignTAXI):

“Oops, sorry, you’re right, Feliperas. Many of the photos we post are taken using our smartphones, but some, like this one, comes from a database of images that resonate with our target audience.”

Getty Images’ terms and conditions clearly say that subscribers are not to practice “false representation of authorship,” which means they cannot pass off artists’ licensed work as their own.

Well, what do you guys have to say about this?