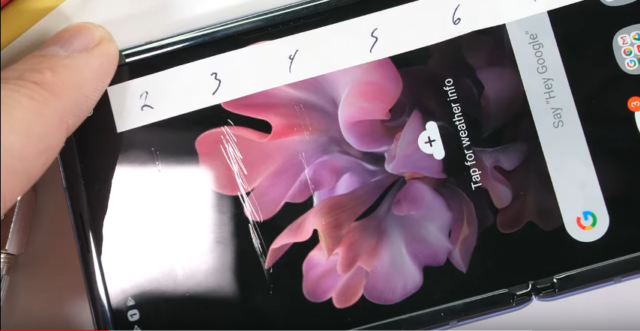 Samsung has recently revealed the Galaxy Z Flip during its Samsung Unpacked event. On stage, the tech company touted its new foldable mobile phone, featuring the awe-inspiring “Ultra Thin Glass”. Naturally, it left some enthusiasts a bit skeptical after Samsung’s last debacle regarding the Galaxy Fold.

Of course, it didn’t take long before the new Galaxy Z Flip fell into the hands of those eager to put the device through the wringer. As reported by The Verge, Zach Nelson a popular tech enthusiast on YouTube got a hold of a Galaxy Z Flip and put the Ultra Thin Glass to the test.

Uploaded on his JerryRigEverything YouTube channel, Nelson began testing the Galaxy Z Flip right out the box. His mission was to show how resistant the Ultra Thin Glass was to scratches, dents, and other wear and tear issues users may experience upon purchasing the device.

It isn’t long before Nelson experiences noticeable markings on the device’s screen. Throughout the 12-minute video, Nelson applies a variety of scratches to the display using Mohs hardness picks. Typically, noticeable markings can be seen when using a level 6 or level 7 pick. However, on the Galaxy Z Flip, scratches are quite damaging even after only using a level 2 pick on the screen. Before Nelson even gets to a level 6 pick, it’s quite apparent that the durability of the glass doesn’t compare the standards of other devices.

The tests continue to show how resistant the screen is to direct fire and punctures the OLED screen with small holes. Near the end of the video, Nelson explains: “This screen is in no way scratch-resistant whatsoever.”

Based on the durability tests, it seems as though the Ultra Thin Glass holds the scratch resistance of a thin plastic material. Although the flexibility of the panel is impressive, it does raise some worries when it comes to the longevity of the device’s screen.