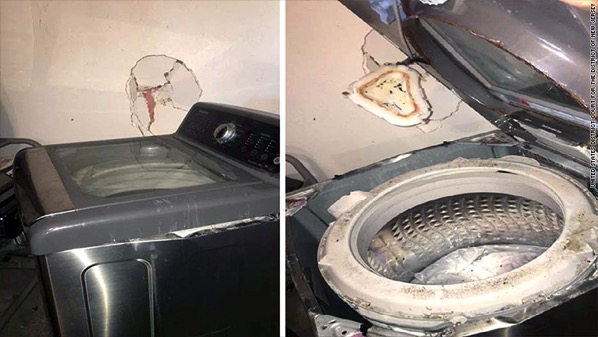 The U.S. Consumer Product Safety Commission has issued a safety warning to owners of certain top-loading Samsung washing machines manufactured between March 2011 and April 2016, following reports that some of these have exploded, CNN reports. While the commission did not specify a model, it did suggest that all owners should only use the delicate cycle to wash bedding and water-resistant and bulky items because of the lower spin speed.

“In rare cases, affected units may experience abnormal vibrations that could pose a risk of personal injury or property damage when washing bedding, bulky or water-resistant items,” Samsung said on its website. The company said consumers with affected models should use the lower speed delicate cycle when washing those materials.

Samsung did not mention the models impacted but asked customers to enter their washing machine’s serial number to determine if their machine is affected. It is also not yet known how many units have exploded, although a Samsung spokesperson said that models sold outside the U.S. and Canada are not affected by the issue.

The source notes that Samsung is already facing a lawsuit from U.S. customers who, according to a filing in a New Jersey court on Aug. 12., said their machines “explode during normal use”.

A washer belonging to a McAllen, Texas, woman “exploded with such ferocity that it penetrated the interior wall of her garage,” according to court filings. A woman in Dallas, Georgia, said it felt and sounded as if “a bomb went off.” The lawsuit, filed in federal court in New Jersey, references similar reports collected by local news and filed online with regulators. It also claims Samsung “has moved aggressively to collect and destroy all evidence of the defective machines” after they exploded.

Earlier this month, the South Korean company announced a global recall of at least 2.5 million Galaxy Note 7 smartphones in 10 markets due to faulty batteries causing phones to explode.