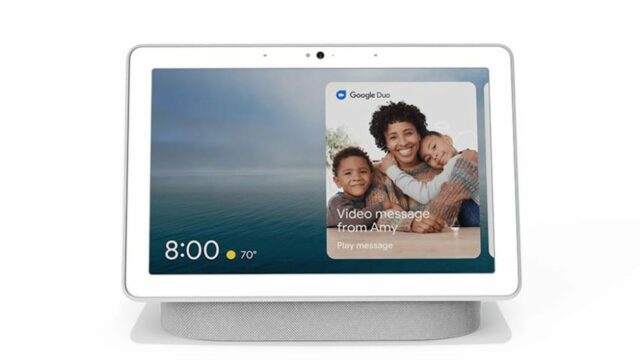 Spotify has launched support for real-time lyrics on Google Nest Hub. Following the feature’s launch on iOS, Android, console, and desktop, Nest Hub users can now follow along with the lyrics of the songs they are playing.

As reported by 9to5Google, Spotify launched real-time lyric support on Google Nest Hub without any big announcement. Multiple users have confirmed the quiet rollout with some showing demos of the feature, including Jan Boromeusz.

To access the feature on Google Nest Hub, users must tap the lyrics icon appearing in the bottom-right corner of the screen when you select a song. Additional taps on the screen will swap the background image.

As with how the feature works on mobile devices, consoles, and even select smart TVs, Spotify’s real-time lyric feature shows a scrolling stream of lyrics that play along with a song. Users can follow the lyrics and sing along. They can also be a useful tool for figuring out that one line that you just can’t remember.

The feature was first introduced in 2018 when Spotify launched real-time lyrics globally in 2021. Initially, the company tested the feature in select markets such as South America, Central America, and Asia. However, in November, Spotify finally brought the feature to all markets across a multitude of devices and platforms.

To produce real-time lyrics, Spotify has partnered with music data company Musixmatch. At the end of each song, Spotify’s feature notes that the lyrics are “Licensed & Provided by MusixMatch.”

Apple today released iOS 16 beta 5 and more for developers today. These new releases included some new features, such as bringing back the battery percentage to the battery icon in the status bar on iPhone. Also, for finding devices such as your iPhone from Apple Watch, there’s a new alert sound. Some other minor...
Gary Ng
13 hours ago

Your Apple Watch can help you find your iPhone if it’s nearby. Simply Touch and hold the bottom of the screen, swipe up to open Control Center, then tap the Ping iPhone button. As a result, your iPhone makes a tone so you can track it down. In the latest beta release of iOS 16,...
Usman Qureshi
16 hours ago