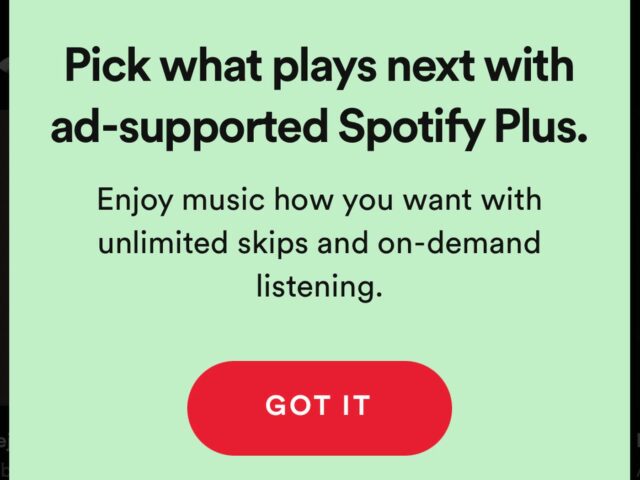 Spotify is testing a new ad-supported plan which appears to provide perks and sit between its free and premium tier. ‘Spotify Plus’ is said to cost $0.99 USD/month and features unlimited skips and on-demand listening.

Spotify has confirmed it is testing a new entry-level paid tiered subscription following the news being shared to The Verge. According to the report, the news of Spotify Plus’ existence came by way of a reader. Following that, Spotify provided a statement, contextualizing the limited scope in which the test is currently taking place.

“We’re always working to enhance the Spotify experience and we routinely conduct tests to inform our decisions,” a spokesperson said. “We’re currently conducting a test of an ad-supported subscription plan with a limited number of our users.”

When looking at the spread of the platform’s tiers, Spotify Plus provides a good middle ground and cheaper alternative to the Premium subscription. In contrast to the Premium sub, which costs $9.99 CAD/month, Spotify Plus offers similar perks such as unlimited skips and the ability to freely chose a track to listen to. However, listeners will still be treated to ads throughout their time using the app. On the other side, Spotify’s free tier offers only six skips per hour and generally only offers shuffled tracks to listen to from each artist.

There’s no guarantee that Spotify will release the Plus tier to the general public. Even if the company wishes to do so, we currently do not have an indication of how long the paid tier will be tested by those limited number of users before the company deems it acceptable for a global launch.