The Supreme Court of Canada has given the green light for a B.C. woman to launch a lawsuit against Facebook, in a ruling made Friday, reports Reuters:

British Columbia resident Deborah Douez brought a notice of claim against Facebook in 2012, saying that her name and image were used without consent for the social media platform’s “sponsored stories” product.

Douez said her privacy rights under provincial law were violated, a growing concern among social media users in recent years who fear their personal information or photos will be used without their knowledge.

The decision means Douez can pursue her lawsuit in B.C., instead of Facebook’s home in Menlo Park, California, as per the social network’s Terms of Service on legal disputes.

The issue is related to the now defunct “Sponsored Stories” ad product, which saw Facebook apply a user’s name and picture in ads targeted to friends, based on pages ‘liked’.

The ads, which the company dropped in 2014, used Facebook members’ names and pictures to advertise companies and products to other members. The social network reached a $20 million settlement in the U.S. over the use of “Sponsored Stories”, with settlement granted by court in 2013. 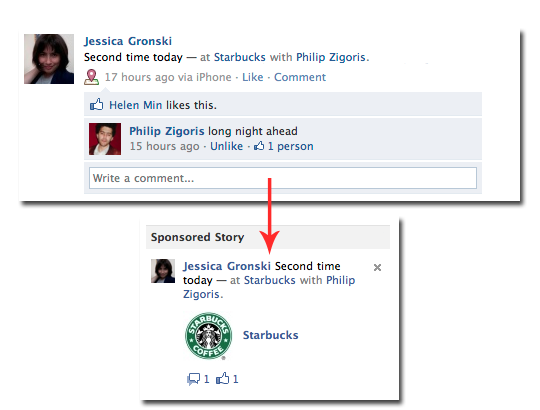 Facebook wanted to suspend Douez’s lawsuit, stating their terms require any disputes to be resolved in California court.

But the Supreme Court of Canada ruled that specific clause is unenforceable in their 4-3 ruling, stating a “gross inequality of bargaining power” between users who basically must accept Facebook terms of use.

The ruling also stated when it comes to cases that impede citizens’ rights, Canadian courts have greater interest “because these rights play an essential role in a free and democratic society and embody key Canadian values.”

Facebook told Reuters the underlying claims are without merit and will “vigorously” defend itself.

The Associated Press reports the three dissenting justices agreed the trial should be held in California, as per Facebook’s terms, saying “We agree with the Court of Appeal of British Columbia that strong cause has not been shown and that the action must be tried in California, as the contract requires,” while also citing there were no reasons to “depart from established international law upholding forum selection clauses,” said the report.