Tesla has today officially introduced a couple of new features via a software update, that make its cars more secure and pet-friendly. First up is the ‘Dog Mode’ that aims to keep owners’ pets at a comfortable temperature when left unattended in the car, while the other new ‘Sentry Mode’ feature essentially allows the car to guard itself.

When the Dog Mode is activated, it keeps your pet at a comfortable temperature while you’re out of the car and will use the jumbo display at the centre to show a message for passersby that you’ll be returning soon (see below). 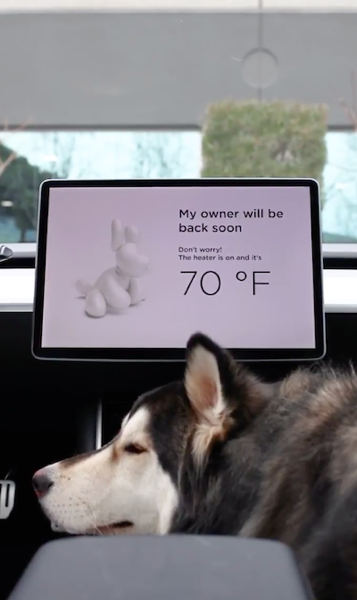 Similarly, the ‘Sentry Mode’ monitors the car’s surroundings while it’s locked and parked. Tesla notes that the feature uses the vehicle’s external cameras to detect surrounding threats and sends alerts to an owner’s Tesla mobile app if an incident occurs.

Here’s how the feature works according to Tesla’s official blog post:

“When enabled, Sentry Mode enters a “Standby” state, like many home alarm systems, which uses the car’s external cameras to detect potential threats. If a minimal threat is detected, such as someone leaning on a car, Sentry Mode switches to an “Alert” state and displays a message on the touchscreen warning that its cameras are recording. If a more severe threat is detected, such as someone breaking a window, Sentry Mode switches to an “Alarm” state, which activates the car alarm, increases the brightness of the center display, and plays music at maximum volume from the car’s audio system.”

The new update is rolling out to Model 3 cars in the U.S. starting today and will soon be available for Model S and Model X vehicles built after August 2017.